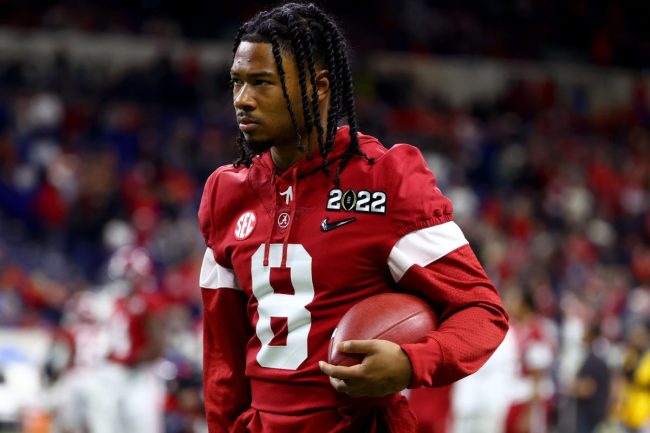 Rookie wide receiver John Metchie III revealed that he has been diagnosed with cancer ahead of the 2022 NFL campaign. The diagnosis will force him to miss the upcoming season as he begins his battle against Leukemia the fall.

The news comes as a shock to the NFL world as many had hoped to see the talented pass catcher in action this year. He was recovering from a leg injury that caused him to miss his final two games at Alabama. Those two matchups were College Football Playoff after the superstar hauled in 96 catches for 1,142 yards in his final season.

While Metchie won’t be able to take on NFL defenses in 2022, he faces an even more important battle against cancer. The team announced the diagnosis on Sunday, and it appears the wideout is in good spirits as he prepares for the months ahead.

“Recently I was diagnosed with APL (Acute Promyelocytic Leukemia), the most curable form of Leukemia. I am currently receiving great medical care, am in good spirits, and I expect to make a full recovery at a later point in time. As a result of this diagnosis, I will likely not be playing football this season. My main focus will be on health and recovery. Thank you in advance for your support and well-wishes. I cannot wait to come back stronger than ever. God bless.”

Metchie, though going through the toughest time in his life, has received a ton of support from the NFL world.

The outpour of support was large. Metchie has touched many across the football world.

John, you got this, man. As a Bama alum, Roll Tide and we're behind you.

Prayers up for John Metchie 🙏🏾🙏🏾 https://t.co/InOHjJ1qKM

Such a fan of this young man. Praying for healing in all things. Can’t wait to see you back. https://t.co/X29dA01kr2

Impossible not to like this guy if you’ve ever met him. All the best to Metch during his fight and recovery. https://t.co/VPRP1vr1Vu

We all wish Metchie a speedy recovery in his cancer battle.