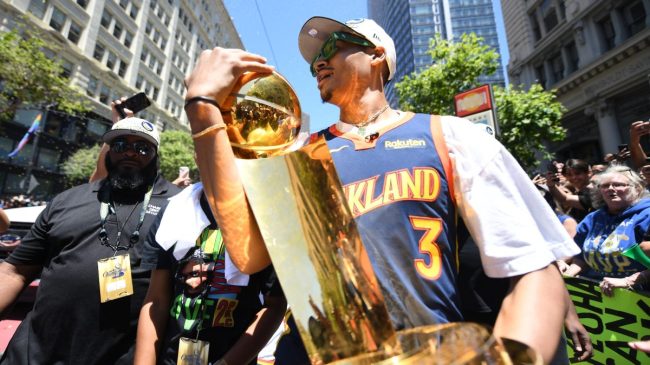 The Golden State Warriors are NBA champs. The team took down the Boston Celtics to land their fourth league title in eight years, winning each of the last three games in the Finals series.

They’ve been celebrating ever since.

Once the party wraps up, though, the franchise will have to decide what to do about the future. That future will certainly include youngster Jordan Poole, who just wrapped up his third NBA season.

He was a star coming off the bench in the 2021-22 season, averaging 18.5 points a game. That success carried over into the playoffs where he scored 17 points a night.

Poole was a big part of Golden State’s championship run, and now, he’ll be looking to cash in. Reports have begun to surface stating what his asking price could be.

According to San Francisco Chronicles writer Connor Letourneau, that number could land somewhere near $100 million over the next four seasons. The extension would help keep the team’s title-winning roster intact, but it would force the Warriors to continue outspending their opponents.

If fact, Letourneau says that Golden State could have to up their already massive roster price of $350 million to north of $400 million. That would likely include an Andrew Wiggins deal, too. Comparatively speaking, only four other NBA teams surpassed the $200 million-mark last year.

Many fans are wondering whether the price is too high for Poole.

Many are skeptical of offering Poole a $100 million deal.

That’s kinda too much for the way he be playing but congrats.. https://t.co/VzVADgocWP

Others, however, believe that the young star is worth it. He could be a focal point to build around as Steph Curry, Klay Thompson, and Draymond Green continue to age.

In 4 years, that 25 mill is gonna be a steal. He’s only getting better https://t.co/luKzt3YhyV

Sound about right. Throw him the bag https://t.co/IEeHxMq7pU

We’ll see what the Warriors decide to do with Poole and Co. after the thrill of winning a championship fades.