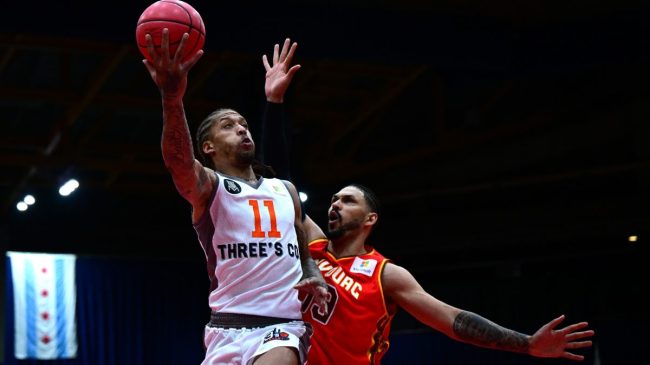 Michael Beasley is back in basketball which is something that every sports fan is happy to see.

The former first-round pick last played in the NBA in 2019 with the Lakers. Injuries and personal issues unfortunately held him back from reaching his potential in the league.

But it’s been fantastic offseason for Beasley as he plans his return to professional ball. Last month, it was learned that he’d signed a seven-figure deal to play in China with the Shanghai Sharks.

He won’t start that gig until October, so in his downtime, Beasley is playing in the BIG3 league.

The 3-on-3 league was launched in 2017 by founders Ice Cube and Jeff Kwatinetz. Former NBA legend Clyde Drexler is the commissioner. Here’s more from the league website.

On January 11, 2017, producer, actor and music legend Ice Cube, along with entertainment executive Jeff Kwatinetz officially announced the launch of the BIG3, a new, 3-on-3, half-court basketball league that will feature some of the best players to ever play the game.

Cube and Kwatinetz had a shared vision of a player-centric league focused on entertainment and innovation. Among those innovations, they introduced the 4-point shot, with three 4-point circles beyond the 3-point line.

Sure, it’s not professional basketball as we know it. There are gimmicks like the 4-point shot and the half-court set up. Still, it’s been able to draw some big names, with Beasley being the latest.

On Saturday, he made his official return to the court.

Beasley put up a team-high 26 points in a 50-47 win. After the game, he said the performance was easy in a legendary interview.

Michael Beasley dropped 26 points in his BIG3 debut on Saturday.

Fans were quick to react to Beasley’s big game, hopping on social media to chime in on the 26-point debut.

Many think he could still make it in the NBA.

Should still be in the NBA https://t.co/GlVeeie3zd

Beasley figures to keep playing in the BIG3, which wraps up its season in August. It should be a nice tune-up before heading overseas to play in China.