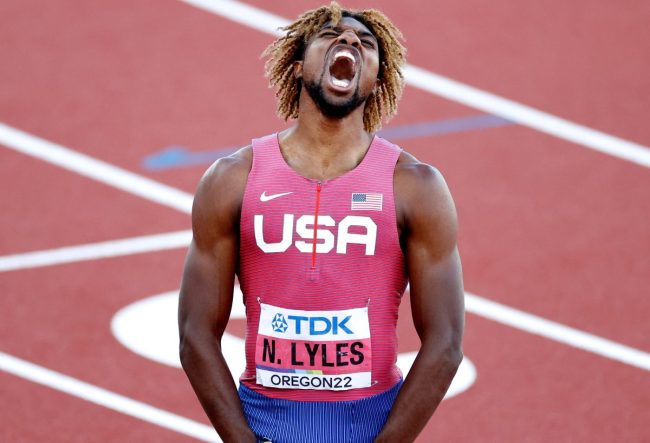 Noah Lyles has done it. The defending 200-meter champion is now the United States record holder after breaking Michael Johnson’s time of 19.32. The sprinter notched the mark Thursday night in Eugene, Oregon.

Lyles completed the race at a clip of 19.31, just easing the former champ. Johnson set his record back in the 1996 Olympics, but the near 30-year mark has now been surpassed.

Lyles completed the feat while literally running away from the rest of his competition. He won in decisive fashion, with the next closest competitor finishing at 19.77, nearly a half-second behind.

Take a look at the impressive victory below.

Lyles isn’t new to the winner’s circle. As we mentioned before, he won this event his last time out, too. But this performance shattered his previous personal record.

It also helped the United States secure a top three sweep in the 200-meter race. A pair of fellow Americans would finish second and third to give the US a clean sweep in both the 200- and 100-meter divisions.

Many around the sports world were quick to react to Noah Lyles’s impressive 200-meter win. Take a look at the immediate social media response.

In case y’all missed it LIVE like I did! New record! https://t.co/AYgVSCfT1f

Related: Fans were banned from cheering at latest Olympics