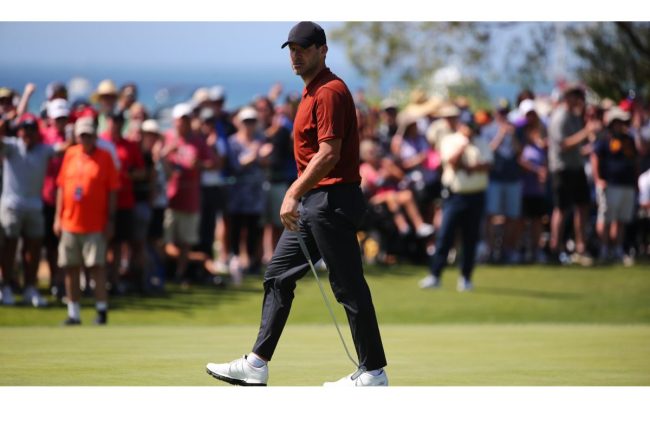 Former NFL quarterback Tony Romo took his talents to the golf course this weekend to participate in the American Century Championship in Lake Tahoe.

Romo is widely known as an avid golfer, even taking his shot on the PGA Tour a time or two. And he showed off those abilities on Sunday, winning the AC Championship in an intense three-man playoff round.

Romo sank a clutch putt to end the matchup. It was the third time that he’s won the event.

Fittingly, he did so in the Sunday red that Tiger Woods made famous.

But while Romo came through in the clutch during this Sunday playoff performance, many fans were quick to bring up some of his NFL postseason struggles while quarterbacking with the Dallas Cowboys.

Social media was quick to respond to Tony Romo’s golf win by taking jabs at the former NFL signal caller. Romo, while successful throughout his professional football career, certainly had some postseason miscues that haven’t been forgotten by fans.

The fumbled snap on a go-ahead field goal attempt. A late pick versus the Giants in 2007. The list of late game blunders goes on.

So when fans saw Romo finally coming through in the clutch, they were quick to bring up his previous mistakes.

The jokes and sarcasm were abundant.

Glad Tony Romo finally came through in the playoffs https://t.co/SgtaRmIePt

Tony Romo is a lot more clutch on the golf course than the football field 😬pic.twitter.com/bbyuKZKpXq

Damn, couple that with all the superbowls and hes a three time champion! Incredible!

Jokes aside, this was a nice win for Romo in this popular celebrity event. He’ll look for a fourth win in Lake Tahoe next time around.