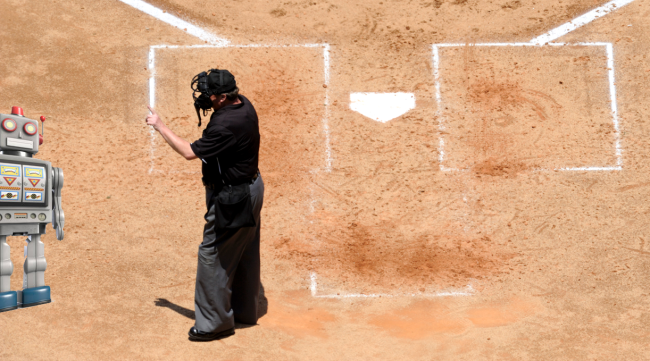 In news that is sure to rustle all of the jimmies of baseball purists, Major League Baseball will be using robot umpires at all 30 Class AAA parks in 2023.

That means, if all goes well, Major League Baseball could be just one year away from using the electronic strike zone at the big league level.

“The Automatic Balls and Strikes system, commonly referred to as ABS, will be deployed in two different ways,” Buster Olney of ESPN reports. “Half of the Class AAA games will be played with all of the calls determined by an electronic strike zone, and the other half will be played with an ABS challenge system similar to that used in professional tennis.

“Each team will be allowed three challenges per game, with teams retaining challenges in cases when they are proved correct. MLB’s intention is to use the data and feedback from both systems, over the full slate of games, to inform future choices.

“As of now, MLB has no firm date to implement its Automatic Balls and Strikes system in the big leagues.”

Many fans welcome our baseball robot overlords after last season was littered with terrible call (four strikes in an at-bat?) after terrible call (a walk on ball three?) by the human versions of the game’s arbiters.

@astros going to hack them

“It’s just less barking and chirping from the players, you can’t yell at a robot umpire,” said Sandberg.

While many fans look forward to robot umpires, there are, of course, exceptions.

“All hitters want is consistency with balls and strikes. I believe this is a net positive for baseball. Too many subjective calls by umpires, especially with 2 strikes,” another fan tweeted.

“Only a matter of time until this hits the majors. This is bad for baseball, part of the game is the human element of the human umpire,” commented another fan.

Why are we trying to ruin the game?

And, as one would expect, there were a zillion different GIFs of robots in the comments.

This past season, Major League Baseball implemented several new rules including the universal designated hitter (to much similar whining from all the purists).

The 2023 MLB season will see the introduction of a pitch clock, limits on the shift, larger bases, and restriction on the number of times a pitcher can attempt pickoff throws.

Sadly, the pandemic-induced rule that each extra inning begins with a runner on second base appears here to stay.