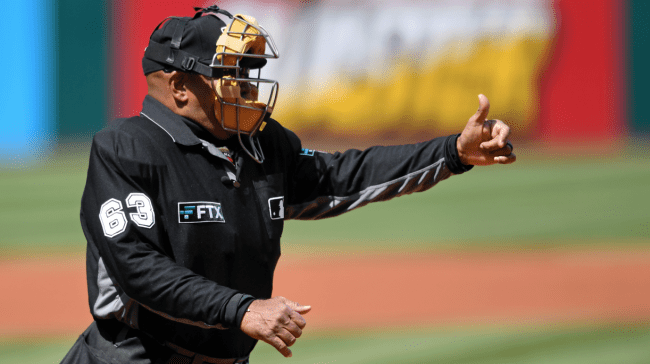 Major League Baseball umpires have not been helping their case this year against the league using robot umpires in the future.

Earlier this month we saw MLB home plate umpire Jim Wolf give Houston Astros’ slugger Yordan Alvarez four strikes in an at bat. Terrible to be sure, but at least it didn’t affect the outcome of the game (unless you had a wager on the pitcher’s strikeout prop).

Fast forward to Monday night in the top of the ninth inning of a tie game between the Angels and Mariners, and once again an ump show broke out.

Watch as Loup throws a ball with his first pitch, then a couple of called strikes to make the count 1-2. The fourth pitch of the at bat was then called a ball, making the count 2-2. Loup then throws another ball, the third of the at bat, and Diaz awards Santana first base with a walk.

Earlier in the month we saw a hitter get four strikes.

Unlike when umpire Jim Wolf gave Yordan Alvarez four strikes in his at bat, this time there were consequences.

Would it have mattered if Santana had been forced to continue his at bat, rather than receiving a walk on three balls? Maybe, but we’ll never know for sure.

Regardless, fans were understandably upset over the ridiculous mistake.

“umpires have such a hard job you shouldn’t criticize them”

This is embarrassing…do better @MLB

Dude needs fired. Can’t do that in the 9th of a tied game.

Santana earned that though

As it turns out, he kind of did.

Following the game, home plate umpire Laz Diaz admitted, “Yeah. I messed that one up.”

He said that after the fourth pitch, Santana asked him if the count was 3-1 and Diaz told him “no it’s 2-2. Then I started thinking, maybe it is 3-1, because I forgot I called that first pitch a strike. There were so many pitches going on, I lost the count on that first pitch. I knew I called a strike on the steal, and that’s the only one I remembered. I couldn’t remember the one before that.”

“There were so many pitches going on, I lost the count on that first pitch. I knew I called a strike on the steal, and that’s the only one I remembered. I couldn’t remember the one before that.”