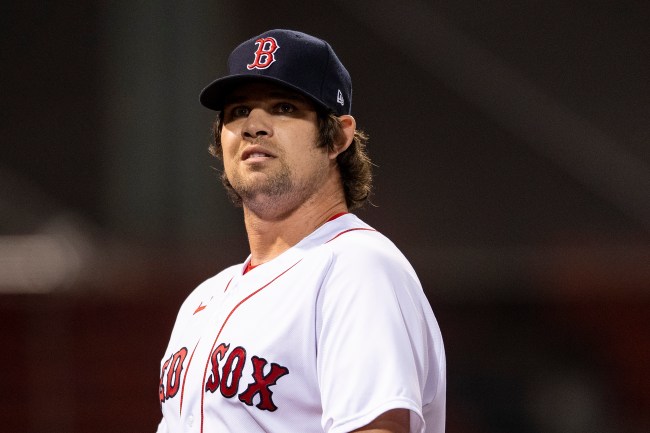 The Boston Red Sox have had such a pathetic season, with the iconic franchise sitting in the basement of the AL East with a dismal 12 wins in 37 games. Talk about a fall from grace, right? Things were always going to be rough this season given the circumstances and the trade of former AL MVP Mookie Betts earlier this year, but nobody probably expected this.

Given the team’s struggles, it’s not surprising to hear the stories of frustrations from various people. While fans are expected to be upset, Red Sox pitcher Robert Stock got a little surprise on Twitter in the form of his wife after a bad outing he had earlier this week.

Stock has struggled all season long, posting an insane 12.50 ERA in six appearances. But his wife took a serious dig at him after a fan on social media pointed out how his physical appearance looks like a man who’s had a rough go of it. Take a look at the friendly exchange below.

Your original tweet made us laugh!! He’s got quarantine hair and might eat a little too much ice cream for a pro athlete but anything to get through 2020 😜

I know nothing about Sara Stock, but go ahead and give her the Wife of the Year Award (if there is such a thing) after this serious zinger. Imagine being Robert Stock right now and having to laugh off this after the pathetic season you’ve had. Hopefully he’s a good sport and knows it was all just a little joke.

After people on Twitter saw Sara’s tweet, they couldn’t help but show some love towards her. Take a look at some replies below.

Here’s the pitch: ball outside, 3-0; this pitch has been brought you by the divorce attorneys at Branson and Branson: if you can’t find the plate, you might lose your mate!

Coach, you need to sign her to your staff at all costs. Fear of being rejected by your loved ones is the most powerful motivation for an athlete.

I’m on thin ice, but sometimes you need that extra pressure

dude, me too. she is going to have more followers than me before she goes to sleep tonight lmao. Excellent work.

You have now become my all time favorite Red Sox spouse pic.twitter.com/vLxRUmspPE

The season for the Red Sox is all but over, and Stock and his fellow teammates are probably already looking forward to the offseason. Given this kind of humor from Stock’s wife, he may actually have more fun sitting at home than on the baseball field where he’s been getting regularly shelled and watching his club rack up L’s.