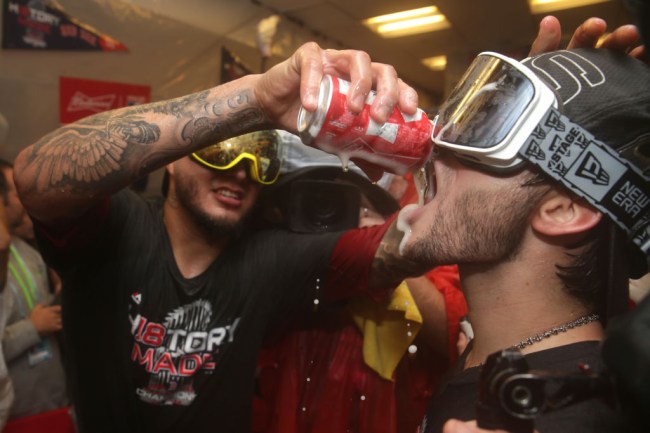 The Boston Red Sox had one hell of a season, ending the year with 119 wins before rolling through the competition to bring the World Series trophy back to Boston for the fourth time in the past 15 years.

It was a year worth celebrating and celebrate they did.

The Sox followed tradition by commemorating their championship victory by chugging beers and wasting enough champagne to bring a tear to the eye of a broke college kid and haven’t really slowed down since then.

The Washington Capitals set the standard for post-championship partying after taking home the Stanley Cup and at least one of their players thought the Red Sox had no chance of going as hard as they did.

However, that hasn’t stopped them from trying.

According to TMZ, the Red Sox managed to drop $600,000 over the course of two different parties following the World Series win, racking up a $300,000 tab in Los Angeles before returning to Boston and doing the same thing at a club in the city.

However, when you consider the Warriors spent $500,000 on booze for their victory parade earlier this year I think it’s fairly safe to assume that the Sox have cracked the six-figure mark— a number that will only grow larger as they do what they can to fend off the brutal hangover coming their way.

They’ve also gotten a little bit of help from outside sources, like the fans at yesterday’s parade who chucked beers at the duck boats along the route (including one that dinged up the World Series trophy).

Each member was also gifted a custom bottle of Johnnie Walker.

Bottles of Johnny Walker Blue given to members of the Boston Red Sox. pic.twitter.com/XgnzQNpH1z

I also assume Sam Adams sent at least a few cases of their celebratory brew over to Fenway.

If only there was some way to track how much money they’re going to spend on Gatorade when the party ends.