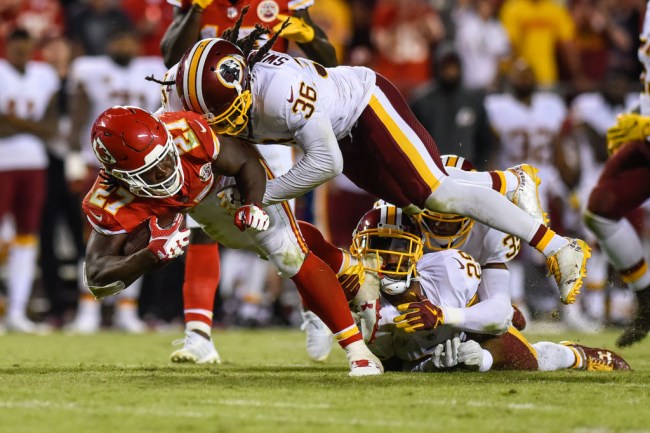 Last night, the Kansas City Chiefs and the Washington Redskins shocked the NFL world with a blockbuster trade that would send QB Alex Smith to Washington and up-and-coming cornerback Kendall Fuller to Kansas City.

Via The KC Star

Quarterback Alex Smith has a new home, as sources tell The Star that the Chiefs have reached agreement to trade their veteran starter of the last five seasons to Washington.

The Chiefs will receive a 2018 third-round pick and promising young cornerback Kendall Fuller in exchange, a source confirmed, though any trade involving Smith can’t be completed until the first day of the new league year, which begins at 3 p.m. on March 14. But the sources say the deal is in place and will definitely proceed.

The team’s linebacker DJ Swearinger didn’t seem to be a big fan of the deal.

Was there ever a standard on how it was done? When is elite over looked? When is your best not worth fighting for? This is a tough one.

Never Saw Any Bullshit Like This In My Life!! Idc who i rub wrong because you never sat in a meeting nor put in work with my dawg!! People say they wanna win right but you throw away your best defender!?!? Somebody you can set a standard with?!?! #Defense will win championships!!

Hey buddy @KeFu11er, be Honored!.. as I stated to you earlier.. because it was an honor to battle along side you and watch you become what you are today in such a short span Keep Ascending to the Top my friend 🖖🏽

It’s pretty mind-boggling that the Redskins traded away one of their best defensive players for Alex Smith. We’ll have to wait and see how this move works out for them.

“They gave up a player that some people told me was already their highest-rated defensive player. … He was the key to the deal. In the end, that’s really the trade – Kendall Fuller for Alex Smith." – @AdamSchefter on @dpshow