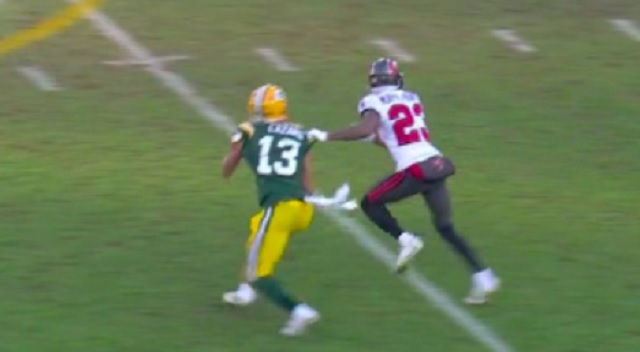 There’s already some controversy in the first half of the Bucs-Packers NFC championship game.

Before the end of the half, Aaron Rodgers threw an interception to Sean Murphy-Bunting.

This probably should've been a penalty, but instead it's an interception for the Bucs on Aaron Rodgers. pic.twitter.com/m8W3Nt7DTU

After looking at the replay it was clear that the Bucs got away with holding on the interception.

Sean Murphy-Bunting picked off Aaron Rodgers on this play 👀 pic.twitter.com/9FQiBWCMK3

The Bucs were able to score a touchdown a few plays after the touchdown and fans were angry at the non-call.

I mean… certainly a holding there.

HELL OF A PLAY… but held the HELL out of 🦎

Tom Brady getting the benefit of the refs. Ugh.

Now the question is who the refs are going to favor this game?

Tom Brady or the Packers?

Seems like Brady is winning this battle of the zebras so far.