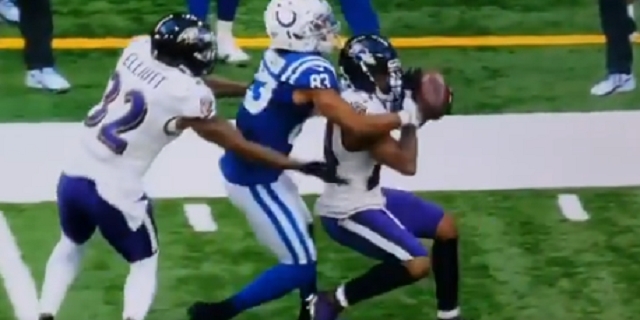 The refs in the Ravens-Colts game may have made the worst call of the season on Sunday.

In the third quarter of the game, refs initially ruled an interception attempt by Marcus Peters to be an incomplete pass when it appeared that Peters did not have control of the football before dropping it. Ravens head coach John Harbaugh disagreed with the call on the field and initiated a replay review which led to refs ruling the play an interception and a fumble by Peters.

Tune in on CBS! pic.twitter.com/nHQah4A0be

This was ruled an interception after replay review (via @_joeyhayden) pic.twitter.com/B8E0MOf1Kx

Fans were confused by the call considering it clearly looked like an incomplete pass.

And we bet on these #NFL games… this was ruled a catch and fumble lol… how??! Not even close. Every week they make up the rules as they go. Then they go to sone bum in the booth to back up the refs #Ravens #ColtsVsRavens pic.twitter.com/MOknklbiRh

I just saw the Marcus Peters play. At some point you gotta run out of words for officiating. How they making these mistakes with replay?

The NFL is doing their best to keep the Ravens at the top.

How is this called an interception for Marcus Peters?

Update NFL Senior VP of officiating Al Riveron tried to explain that there was “clear and obvious evidence” Peters controlled the football and took three steps before fumbling it away.

I don't think Peters ever had complete control, certainly not for all three steps. Big turnover in this game. https://t.co/ixzBPPWlDy

Sorry Al, not sure anyone outside of Baltimore would agree with you. https://t.co/F39jrJGIEu

The NFL should replace its entire expensive officiating crews with a couple of dudes at a folding table rolling D20s in a basement. https://t.co/P4d3wdc7lg