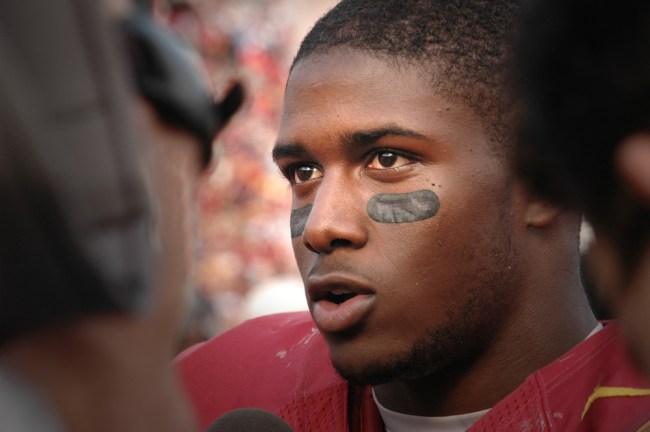 Reggie Bush might have had to vacate his 2005 Heisman Trophy winner but he’s still one of the greatest college running backs to ever play the game. He knows a thing or two about what it takes to be a successful collegiate athlete at the highest level and he also knows what it’s like to get PAID at the professional level.

Since entering the NFL in 2006 with the New Orleans Saints on through his 2016 contract with the Buffalo Bills, Reggie Bush has raked in over $25 million in career salary earnings (before endorsements). That’s a far cry from the ZERO dollars he was paid by USC during the time he was in college.

Recently, Reggie Bush sat down with Business Insider Video and he was asked about whether or not college athletes should get paid. Like me and most people with compassion and a brain, Reggie Bush believes that these college athletes should get paid because they’re sacrificing their bodies and the schools are making millions off of them without much in return. Here’s his answer:

Here’s a transcript of his answer:

You know the way I look at, especially for football, they’re putting their bodies and livelihood’s on the line. Just like we are even at the professional level. Just to say that college education is enough when the universities are making so much money off the athletes. They’re selling your likeness. Selling your jerseys, bobbleheads, whatever else, blankets, whatever else they can sell, while you are there for those 3 or 4 years. The kids deserve more and they should be given more. They should at least be compensated. I don’t know what the number is but it should be something. (via)

Reggie Bush isn’t exactly saying anything new here but this is pretty significant because it’s one of the most famous college football players of all time coming out and explicitly saying that the players deserve to get paid. What do you bros think? Should they get paid or nah?