Reggie Bush Is Going Off On The NCAA, Maintaining His Innocence, And Demanding He Get His Heisman Trophy Back 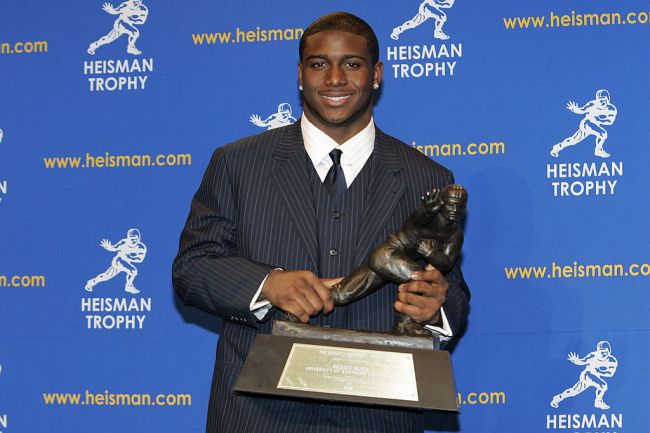 The greatest player in college football history wants his hardware back. On the day that the NCAA granted athletes the rights to profit off of their names, images, and likenesses, Reggie Bush is asking for his Heisman Trophy to be returned.

Bush was received the trophy after the 2005 season. He recorded a ridiculous 2,233 all-purpose yards and 19 touchdowns en route to a 12-1 record. The USC Trojans fell one win short of a national championship that year.

However, all of the individual and team success has been entirely vacated in the eyes of the NCAA. Bush and USC had the entire 2005 season vacated in 2010 when the NCAA ruled that the running back had received improper benefits while still in school.

As a result, the NCAA took his trophy. Now, Bush is fighting to get his Heisman back and is blasting college sports’ governing body in the process.

The NCAA ruled on Wednesday that collegiate athletes may make money off of their own person beginning July 1. Athletes around the country are already signing endorsement deals and creating their own brands.

Under the new ruling, it is estimated that Bush could have made millions of dollars from his own name. Instead, he accepted an insignificant amount of money (comparatively), but because it was under the table, his legacy in the NCAA record books is nonexistent.

Well well well….look what we have here 😏

The 36-year-old took it one step further on Wednesday and put the NCAA and Heisman Trust on blast in a statement.

Bush is adamant in his fight and maintains that he was painted in a certain narrative..

I never cheated this game. That was what they wanted you to believe about me.

He will not stop until the Heisman is back where it belongs. And he is not the only one.

As the conversation grows surrounding Bush’s trophy, many big-name personalities have come to his side, including a fellow former Heisman winner. Johnny Manziel, who offered advice to current NCAA athletes on Thursday, also tweeted about Bush’s trophy on Wednesday evening.

Give Reggie Bush his Heisman back while we’re at it

ESPN analyst Jay Bilas, who has long been against the guise of amateurism in college sports, also tweeted about Bush, among others.

Hey NCAA: since you have now admitted that college athletes are professional, how about righting past wrongs and reinstating the records of Reggie Bush, the Fab Five, and countless others you mistreated over the phony concept of amateurism? It was unfair then, and clearly so now.

Here are some of the other reactions around the country:

Reggie Bush. He was BOX OFFICE. In that LA market. Easy choice. https://t.co/8SlLWSmQXp

You think they going to FedEx or use a courier service to get Reggie Bush back his Heisman?

Reggie Bush: “I need them royalties from all my jersey sales!”

Give Reggie Bush his Heisman trophy

It was always dumb they took Reggie Bush’s Heisman. But now that name, image and likeness is legal it’s insane. Give him the Heisman back. https://t.co/zANddhMxJN

🗣 GIVE REGGIE BUSH BACK HIS HEISMAN

This would’ve been Reggie Bush in his college dorm room every day if the NCAA let athletes get paid when he was at USC pic.twitter.com/ynnWEfZde0

When is Reggie Bush getting his Heisman back?!?!

Reggie Bush comin back for his Heisman. pic.twitter.com/PrdzLvowYi

This is only the beginning of the fight for Bush and his camp. It has been ongoing for years, but now that NIL is in place, it has a much bigger voice. It seems almost inevitable that the NCAA will lose this battle. Will it grow into a bigger discussion about the vacated wins?