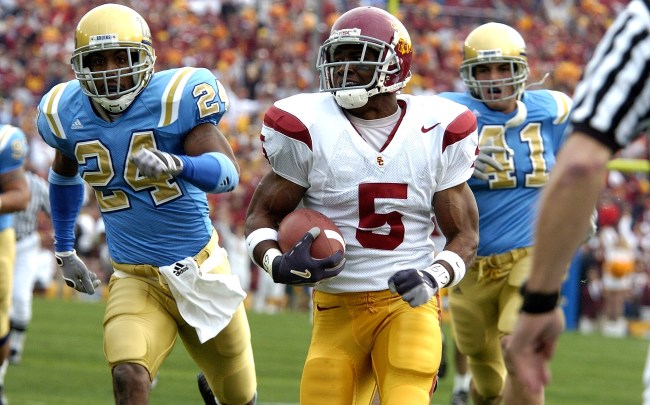 In June of 2010, the NCAA stripped USC football of all of its wins in the 2005 season, its last two wins of the 2004 season, and the team was put on four years of probation, banned from bowl games for two years, lost 30 scholarships over three years, and was forced to disassociate itself from 2005 Heisman Trophy winner Reggie Bush.

In addition to that, with reports swirling that the Heisman Trophy Trust was going to strip him of the award after USC had already returned their copy of the trophy, Bush voluntarily forfeited his trophy in 2012.

Rather than give the Heisman to Vince Young, who finished second to Bush in the voting in 2005, the Heisman Trust has just left that year vacated.

On Wednesday, with news that his 10-year suspension from associating with USC has been lifted and the school will be welcoming him back, Bush spoke to Colin Cowherd about the situation and if now he’s like to have his Heisman Trophy back.

Reggie’s back and we can’t wait to see what he does next. #FightOn pic.twitter.com/Jncsmn0kDO

“To say that I don’t want it back would be a lie. So I do want to be completely honest about that,” Bush said. “One hundred percent I want my Heisman Trophy back. But also at the same time, I’m more focused on the kids now, because what happened to me is in the past. We’re not going to change what happened, and we’re not going to be able to change everything that happened in that situation, but what we can do is learn from it and that’s why I;m so happy, I’m so happy, that kids will now be able to make money off their name, image, and likeness, because that is what’s fair and that is what they deserve.”

Cowherd had previously pointed out in the interview that he believes had college athletes been able to make money off their name, image and likeness this whole time, numbers one and two for raking in the cash would have been Tim Tebow and Bush, with no one else even really in the conversation.

Especially since while Bush was at USC, there was no NFL team in Los Angeles, the Trojans were easily the most glamorous team in college football, not to mention the most successful, and as Bush pointed out, celebrities like Snoop Dogg, Will Ferrell and others made going to USC football games the place to be at that time.

Bush probably should get his triphy back. Heisman Trophy winners have done far worse than what he did. Heck, one from his own alma mater was found responsible in a civil court for the death of his ex-wife’s friend and the NCAA didn’t take his Heisman away. Then again, the courts went ahead and did that for him, so they didn’t have to do it.