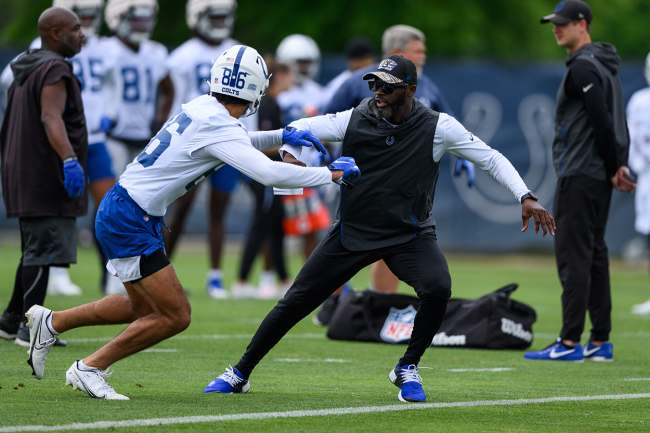 Reggie Wayne is one of the greatest wide receivers to ever do it, even if his name doesn’t end up in the Hall of Fame one day. Thus, there is no one better to teach a wide receiver how to play the position than Reggie Wayne, right?

That’s what the Colts think!

After playing 14 years with the organization and coaching three seasons as a volunteer assistant, Wayne was hired as Indianapolis’ wide receivers coach in March. Although he is not new to the team, nor the position, nor coaching, 2022 will be the first season that he has the position group all to himself.

As the Colts turn attention to the fall and get minicamp underway this week, Wayne threw a mic on his collar and provided an inside look at a day in the world of an NFL legend-turned-receivers coach.

His energy is absolutely unmatched — and it sounds like Monster energy drink has a lot to do with his excitement. He makes that very clear.

The video opens with a really cool moment between Wayne and Matt Ryan. The former asks the latter what quarterback he grew up watching, to which Ryan says Peyton Manning.

Wayne knew it. He said that just by watching him, he could see his former quarterback’s play in Ryan.

From there, he runs over to Michael Pittman. At that point, the second-year receiver jokes about Wayne’s rash, which his coach then throws back on him.

The rest of the video shows Wayne in his natural role as the receivers coach. It offers some really cool insight into the game and gives a great look at Wayne’s enthusiasm for coaching, as well as some of his top-used phrases.

I went from chill'n on the beach….. to trying to inspire and teach… These guys bust their ass everyday. So I became their biggest cheerleader. Gotta have fun if I'm going to do it. Feel me!!! #StillLiving #Colts #Coach #CoachWayne pic.twitter.com/coRoDRgcWH

The Colts did not have a particularly profound passing offense in 2021. With a new quarterback under center and a new position coach for the receivers, maybe Wayne can get things back up and running like they did when he was playing with Manning. How can you not want to play for him?