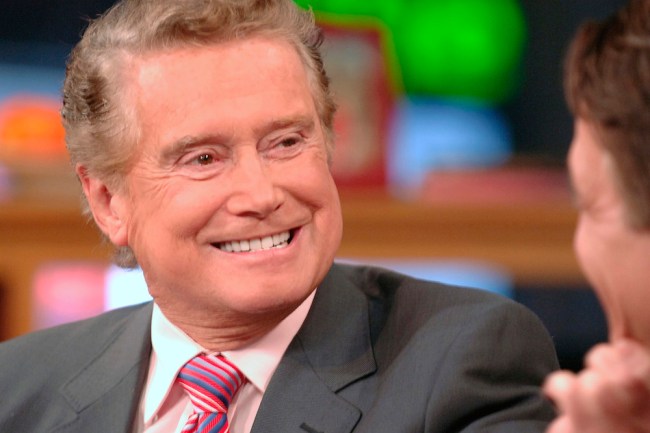 It’s no stretch to say that Regis Philbin was once a pretty powerful guy in the entertainment world. Philbin was the host of a popular daytime talk show, a hugely successful nighttime game show, and holds the Guinness World Record for the most hours on U.S. television.

Regis earned his nickname of the “hardest working man in show business.”

So when the “hardest working man in show business” complained about the New York Times on national television, the editors of the newspaper figured it would be a good idea to make Philbin happy. Philbin’s complaint revolved around his passion for Notre Dame football and his favorite newspaper.

Times print editor Tom Jolly retold the story over a series of tweets yesterday and the tale shows just how much pull Regis in the media and just how differently people consumed the news just 25 years ago.

Fun little side story on Regis Philbin, who, as his obituary noted, was a Notre Dame football fanatic and a loyal reader of the @nytimes print edition.

When The Times created an early Sunday edition in the late 1990’s, the publishing time was set at 3:45 p.m., with the aim of getting it delivered to the far areas of the region. One understandably unforeseen issue: 3:45 was before most Notre Dame games were finished.

As it happened, that 3:45 paper was the edition Regis received at his home in Connecticut – and he wasn’t at all happy that his version of The Times was bereft of news about his beloved Fighting Irish.

After a couple of weeks of this, he brought it up on “Live! With Regis and Kathie Lee,” complaining that something was wrong with The Times if it couldn’t find a way to get Notre Dame football in the Sunday Paper.

That week, The Times created an evening “postscript,” sending updated versions of the sports pages to the press room at 6 p.m. in order to get Notre Dame game stories into the papers that went to Connecticut.

We called it the Regis edition and we never heard another word of complaint.

Or maybe he made a good point and it was easy to satisfy readers in that situation by making a simple adjustment. https://t.co/fcyRTvAdTS

In fairness to Regis, he never specifically asked for this own print edition of the newspaper. The NYT made the move all on their own.

I have my own story about Regis and Notre Dame football but it’s not as world-changing.

When I was 16, I went to a ND football game at Meadowlands. Went to grab the men’s room door and it swung open wildly and guy almost ran me over.

Stopped and looked at me and said “excuse me pal.”

Notre Dame won that day with Regis in attendance so no need to rush home and read the paper.

Philbin passed away last week at the age of 88.