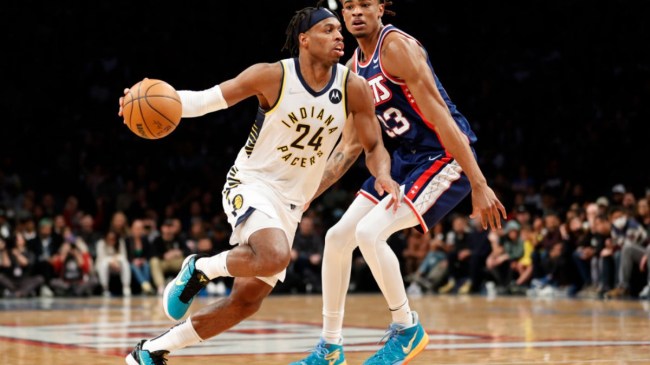 NBA fans have spent all summer waiting for the Los Angeles Lakers to make a big move to try and put themselves back in the title picture for the 2022-23 season.

They had to have something up their sleeves. There was no way LeBron James would allow this team to once again try and fight for a spot in the Western Conference play-in.

Throughout the offseason, they have been linked with some big moves that could potentially help them on their way to contention. There were rumors about the Lakers swapping Russell Westbrook and picks for Kyrie Irving, but the Nets ended up being able to keep their team together.

The Lakers had also been linked to a trade with the Indiana Pacers for Buddy Hield and Myles Turner, but nothing ever came of those rumors either.

Now, HoopsHype’s Michael Scotto has revealed the exact terms of the deal the Pacers were looking to make with the Lakers.

Sources: Before the Lakers traded Talen Horton-Tucker to the Jazz, the Pacers inquired about THT in Russell Westbrook trade talks.

If those are the terms the Pacers were looking for then it seems the Lakers won’t be adding Buddy Hield as they traded Talen Horton-Tucker in the Patrick Beverly deal.

It’s surprising that they weren’t able to get a deal done if these were the terms the Pacers were looking for. Hield and Turner would seem to be much more likely to make an impact for the Lakers than Beverly and they clearly weren’t opposed to trading THT.

Maybe the Lakers have something else planned for those 2 1st rounders.