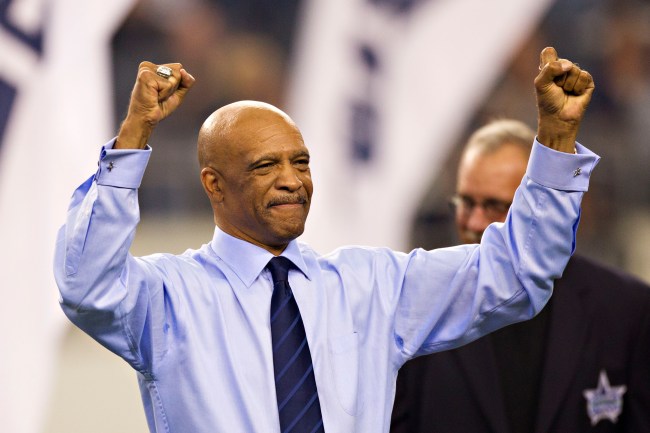 Drew Pearson waiting 33 years to be immortalized in the Pro Football Hall of Fame, and in August the legendary Cowboys receiver will punch his ticket to Canton, at last.

In June 2020, Pearson’s gut-wrenching reaction to getting snubbed went viral, as a month prior he’d been named as a finalist for the special Centennial Class the NFL honored as it celebrated its 100th anniversary, which in his mind was a precursor to a HOF induction. The Super Bowl champion’s celebratory gathering came to a screeching halt after all the names were read.

The Super Bowl Champ & member of the 1970s All-Decade Team has once again been passed over for the Hall of Fame.#DallasCowboys | @wfaa | #PFHOF20 pic.twitter.com/DjQ9ng5ZM3

Further, in 2010, he was selected as a 1970s All-Decade First Teamer. From 1930 through 2010, there had been 17 wide receivers selected NFL first-team all decade. Up until this year, Pearson was the only one Hall snub.

Truly a sad day. Drew Pearson in now the only member of the NFL 1970’s All Decade 1st Team not in. The only player NOT in. #Cowboys @NBCDFWSports pic.twitter.com/1601DD4myZ

All’s well that ends well, and Pearson learned in February that he would be part of the eight-member Class of 2021 to be enshrined come August.

BREAKING: @88DrewPearson has been elected to the Class of 2021!#PFHOF21 | @dallascowboys pic.twitter.com/Xi6J41A7gv

News broke this week that the 3x Pro Bowler has selected Roger Staubach as his presenter. Staubach tossed 27 of Pearson’s 48 career touchdowns, including one of the most iconic plays in Cowboys history: The Original Hail Mary, allowed the Cowboys to upset the Vikings in the 1975 playoffs. In 2019, the NFL pinned the play as the 15th Greatest Play of All-Time, a slot ahead of Odell’s one-handed grab.

Today in 1975, Roger Staubach hits Drew Pearson with his "Hail Mary" as the Cowboys stun the Vikings in the NFC playoffs. Cue Minnesota fans saying he pushed off in 3-2-1 … pic.twitter.com/jiXVnweTFX

The Class of 2021 will take its place in Canton on August 8, 2021 during the Pro Football Hall of Fame Enshrinement Week.

Drew Pearson has confirmed to @NBCDFWSports that #Cowboys legend and HOF member, Roger Staubach will be his presenter at the 2021 @ProFootballHOF in August. pic.twitter.com/azVcVvo16r