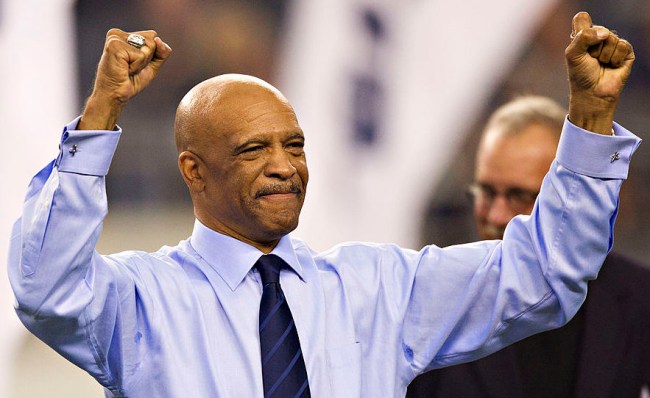 Terrell Owens could not have given less of a shit after he was informed he’d been inducted into the Pro Football Hall of Fame in 2018, and in a very on-brand moment, he opted to skip the ceremony and organized his own event at the University of Tennessee to ensure he’d be the person at the center of attention.

However, there aren’t many other people in the football world who would react to the news that they’re being permanently enshrined in Canton with the same flippancy that T.O. did, as it’s a virtually unparalleled honor and the ultimate testament to the lasting mark you left on the game.

Over the past week, we’ve seen just how much being named to the Hall of Fame means to some people when the NFL decided to break its strange tradition of sequestering nominees in hotel rooms before knocking on the doors of the inductees in favor of a more public reveal.

On Saturday, Bill Cowher got blindsided during the CBS pregame show when David Baker, the absolute unit who serves as the Hall’s president, crashed the broadcast to let him know he’d earned a bust.

Cowher did what he could to choke back tears but Jimmy Johnson let the waterworks flow when he was hit with the same surprise the following day and Troy Aikman followed suit knowing how much it meant to the man he won two Super Bowls with.

Legendary @dallascowboys coach @JimmyJohnson finds out live on TV he is the newest member of the Pro Football Hall of Fame! pic.twitter.com/GK3jlSlWRz

When Johnson came rolling into Dallas, the team hadn’t brought a Lombardi Trophy back to town since winning it all in 1977 thanks to the help of some notable names like Roger Staubach and Tony Dorsett, both of whom would eventually make their way into the Hall of Fame.

The same can’t be said for wide receiver Drew Pearson, who Hall of Fame voters named to the 1970s All-Decade First Team back in 2010. However, unlike every other person on that roster, he hasn’t earned a spot in Canton.

Last month, Pearson learned he’d been named as a finalist for the special Centennial Class the NFL is honoring as it celebrates its 100th anniversary, and on Wednesday, he surrounded himself with friends and family in the hope he’d hear his name called.

Unfortunately, it never was, and Pearson wasn’t shy about showing how he felt about being snubbed.

Truly a sad day. Drew Pearson in now the only member of the NFL 1970’s All Decade 1st Team not in. The only player NOT in. #Cowboys @NBCDFWSports pic.twitter.com/1601DD4myZ

The former Cowboy didn’t hold back and made it very clear he felt like the league had needlessly strung him along before dashing his hopes and dreams.

The Super Bowl Champ & member of the 1970s All-Decade Team has once again been passed over for the Hall of Fame.#DallasCowboys | @wfaa | #PFHOF20 pic.twitter.com/DjQ9ng5ZM3

I will happily admit I knew virtually nothing about Pearson until today, but with that said, I am fully invested in making sure he eventually gets the recognition he deserves after seeing how heartbroken he is over this.