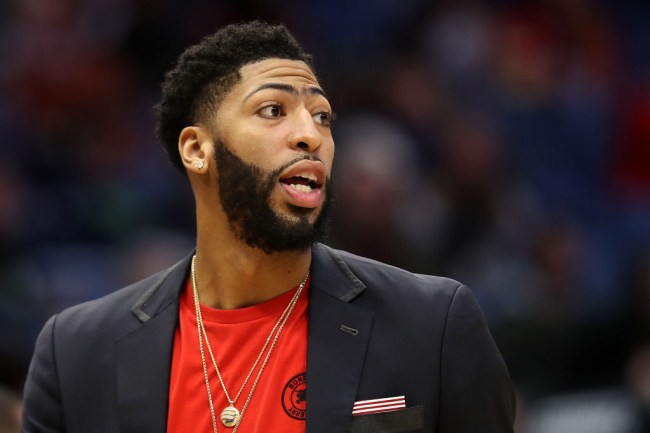 After months of drama between Anthony Davis and the New Orleans Pelicans, the two parties officially parted ways when he was sent to the Lakers to join forces with LeBron James, a duo that will undoubtedly be a force to be reckoned with.

Expectations in Los Angeles will be high next year after the Lakers had an incredibly underwhelming season, which was due in no small part to the underwhelming supporting cast LeBron had—a solid chunk of which won’t be there for the next campaign.

I assume Lakers fans are optimistic Davis is in it for the long haul but there’s no guarantee that he’ll remain with the team when his contract expires and he’ll have the opportunity to explore his options when next summer rolls around.

Davis was surprisingly non-committal about remaining in Los Angeles when he was asked about his future following the trade, and at the time, Jalen Rose suggested he’s already thinking about the possibility of peacing out.

Now, if a new report is to be believed, there might be some veracity to that claim.

According to The New York Post, a source close to Davis’ agent Rich Paul—who’s recently found himself in the news for other reasons—says the rep is already looking toward the future and preparing for a scenario in which the Lakers fail to live up to expectations:

The 2020 free-agent pool is short on stars, but [the Knicks] could be one of the favorites for big fish Anthony Davis if the Lakers implode. Rich Paul, Davis’ agent, likes the idea of his client in New York, according to a source.

I guess there’s no such thing as too soon as far as NBA free agency rumors are concerned.