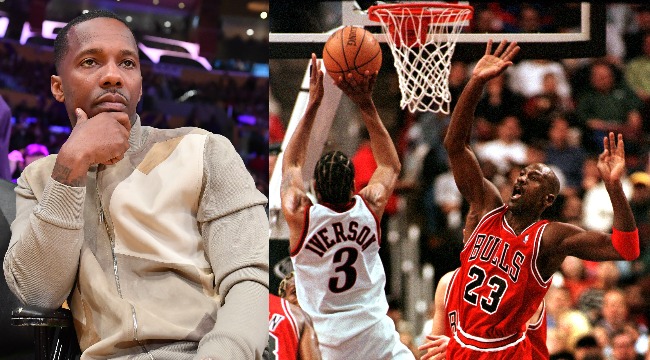 At the time of this writing, mega-agent Rich Paul’s NBA client list consists of 32 players including some guys you may have heard of: LeBron James, Anthony Davis, Ben Simmons, Lonzo Ball, and John Wall.

Not a bad glow up for a guy who James hired as a personal assistant for $50,000 a year after meeting him at an airport. The Klutch Sports founder is now worth an estimated $100 million.

Paul recently sat down with Colin Cowherd to discuss the one player in NBA history who he wishes he could’ve repped. He did not hesitate with The Answer, going as far to say that AI’s brand would have been “neck-and-neck” with Michael Jordan, whose Jordan brand is worth at least $10 billion.

Could Allen Iverson have been as big as Michael Jordan?@RichPaul4 told @ColinCowherd how he would've made it happen pic.twitter.com/K0DUPZ0BgP

“Allen Iverson’s impact post-Michael Jordan was second-to-none…Give me Allen Iverson leaving Georgetown coming into the league and today Allen Iverson will have a billion-dollar brand.

Today Allen Iverson would be positioned much different, still be a Hall of Famer, I’m not talking about what he did on the floor, because obviously, we can’t even talk about that. He’s just a one-of-a-kind person and his impact, what he could have done in the community even though he never done anything for show and he’s helped so many people. But the business to be built with Allen Iverson and that would’ve been still sustainable today, I think would have been neck-and-neck with one of the “Black Cat” in MJ.

Look, he had white America wearing cornrows. The arm sleeve. He had such a different impact. I probably would’ve done things different because I would’ve said, ‘Allen, I’m not focused on the upfront money.’ We put too much focus on the upfront money with guys you can build a business with. I’m building a billion dollar business with Allen Iverson, there’s no question about it.

His retro business, with the right product, would probably have been second to Michael’s today.”

Allen’s financial situation has been dire since it was made public in 2012 that AI, who made $200 million in his 14-year career, could not pay a judge-ordered $859,000 to a Georgia jeweler. Iverson then revealed his preposterous spending in a court filing, consisting of $360,000 monthly spending for a monthly income of $62,500.

$125,000 goes to paying back various creditors and mortgages.

In 2030, on his 55th birthday, Iverson will receive a $32 million trust fund as part of a lifetime Reebok deal he signed in 2001, on top of the $800,000 he receives annually from the brand. I’m not entirely sure whether Iverson will receive the full trust fund payout after reportedly violating the conditions of the agreement with his then-wife Tawanna in an effort to win her back.

It’s obvious Iverson didn’t have a guy like Rich Paul in his ear through his career, or maybe he did, and he chose to live his damn life. That’s what makes AI AI isn’t it?