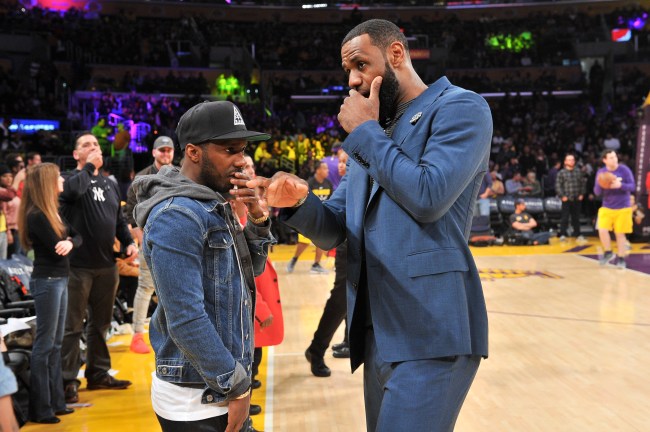 Agent Rich Paul has some major influence over the NBA — after all, he represents superstars like LeBron James and Anthony Davis, and just maneuvered a blockbuster trade to team the two up — but he’s quick to shoot down the notion that he actually runs the Los Angeles Lakers. As wild as that idea might sound, Paul was asked if he did, in fact, run one of the most storied sports franchises while appearing on SiriusXM’s NBA Radio podcast, which he was quick to laugh at.

Although Rich Paul has been rumored to be helping with personnel decisions that the Lakers’ front office makes — and even reportedly talked to NBA Commissioner Adam Silver at one point last year to complain about then Lakers head coach Luke Walton — he confirmed on SiriusXM that he doesn’t have anything to do with the day-to-day operations. Here’s what Paul had to say when asked about the question.

Hear the full in depth interview on the @siriusxm app #LakeShow #LakersNation pic.twitter.com/DeLK7jeIWi

While Rich Paul did respond to the question by asking, “Are you kidding me?” it’s hard not to at least think the agent has some insight as to what goes on with the Lakers before the team makes final decisions. Given the status of his two biggest clients, James and Davis, it’s hard to imagine the team doesn’t at least consult Paul to see what one or both players think of certain moves — which may or may not be routine. But Rich Paul was sure to deny any rumors that he’s the one calling the shots on player moves or coaching decisions.

For those who might forget, an ESPN report mentioned Rich Paul as a “culture killer” because of the presumed sneaky tactics he was doing to get some of his clients on the Lakers together, specifically Anthony Davis, and was even linked to offering coaching jobs to some guys this offseason. It led to a lot of the dysfunction that the organization has dealt with since James signed with the team last summer, and even led one Lakers player to say he was confused as to why some of Paul’s clients weren’t being talked about during trade rumors last season.

Rich Paul is an influential figure in the NBA, and, because he represents LeBron James, he’s probably getting intel other agents otherwise wouldn’t from the Lakers. Does that mean he’s involved with the day-to-day, though? According to him, no, but there will still be people who wonder how deep the info he’s getting really is.