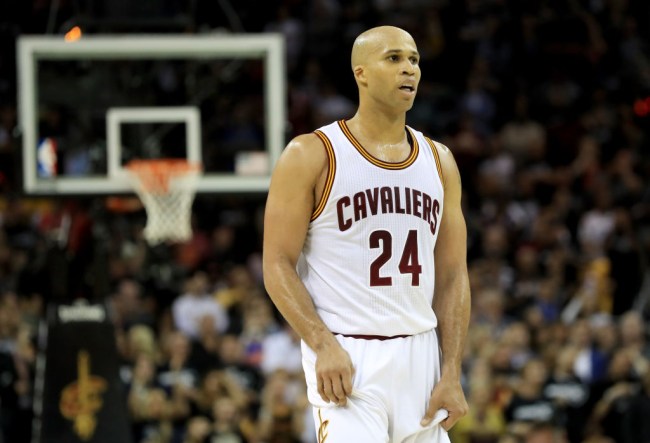 People have been speculating where LeBron James will end up after his most recent contract with the Cavaliers expired since he signed his most recent contract with the Cavaliers and workers at the rumor mill have been working double shifts in the past few months trying to deal with all of the talk about where he’s going to end up now that he’s a free agent.

The vast majority of people (as well as virtually every oddsmaker) think LeBron will end up on the Los Angeles Lakers next season, and if his friend is to be believed, it’s basically a done deal. However, we won’t know for sure until LeBron whips Instagram into a frenzy with sequels to both The Decision and Space Jam. If you’re an NBA fan, it’s been a fascinating saga to follow, but there’s at least one player in the league who’s temporarily cutting ties with James over the all of the hoopla.

On Wednesday afternoon, Richard Jefferson— who played with LeBron in 2017— hopped on Twitter and posted a note to jokingly announce he’s suspending his friendship with his former teammate in an attempt to get people to stop asking about where The King is going to end up next year.

My family & I would appreciate your privacy during this difficult time – Thank You! pic.twitter.com/7zKxZDjcUz

The whole “Drake” thing might have been a joke but I really wish Jefferson had put the time into recording a fake diss where he’s just really complimentary to the guy at the receiving end of his lyrics. I also couldn’t help but think of this when I read that bit about his son.