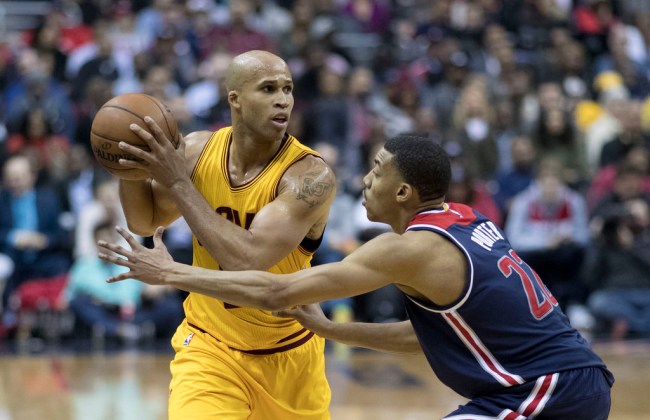 In the 2017 NBA Finals, the Golden State Warriors disposed of the Cleveland Cavaliers in five games. Sparking many to believe that the megateam of Steph Curry, Kevin Durant and the boys spanked LeBron’s Cavs. However, Cavaliers veteran Richard Jefferson truly believes that if a few more key shots went in then Cleveland could have pushed the championship series to seven games. Jefferson appeared on the Bill Simmons Podcast last week where he made the point that the Cavs could have won the NBA Finals if a few more breaks went their way.

Simmons: I went to three of those games. That series was way closer than people remember now.
Jefferson: It was way closer. Like Kyle [Korver], who was one of the great shooters in the history of the game of basketball, like in the history of the game, he has a good look, it doesn’t drop. That’s part of it.
Simmons: Or even two minutes before, J.R. has a wide-open 3 and he takes a hop step to the left and missed it.
Jefferson: And missed it.
Simmons: But if that goes in, the game is over.
Jefferson: And KD hits a tough shot over LeBron on a dribble-up.
Simmons: And then you mess up the two-for-one.
Jefferson: But that’s what I’m saying. People don’t understand. “Oh, 4-1 they killed you!” It’s literally one shot here, one shot there, then you go 2-2. If it’s 2-2, you go there, it’s Game 5. I still stand there. There is zero chance — very similar to the year before, we do not lose on our home court in a Game 6 situation, right?
Simmons: Right.
Jefferson: Now you go Game 7. Anything can happen. That’s how close it is. It’s literally a difference between three shots playing in a Game 7 and losing 4-1.

During the interview, Jefferson also said that Gordon Hayward is the most complete player in the Association. “I played with Hayward in Utah, he is about as complete a player as there can be. There is no flaws in his game, maybe except that he is too unselfish,” Jefferson told Simmons. That’s a pretty lofty compliment from the 18-year veteran who played alongside Hayward while they were teammates on the Utah Jazz before Gordon signed with the Boston Celtics.

Do you think the Cavs have a shot at beating the Warriors this season? Sound off in the poll above.