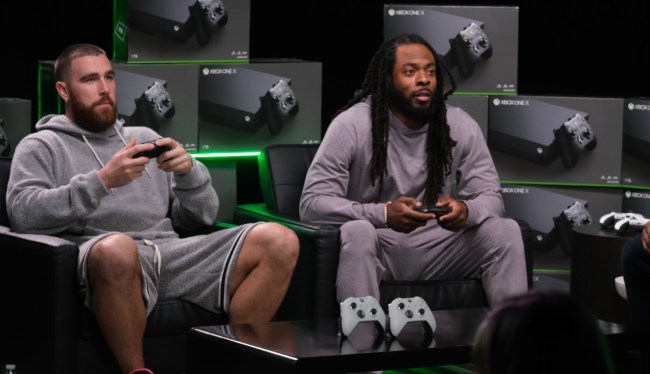 Before Sunday’s big game, Niners defensive back Richard Sherman took on Chiefs’ star tight end in a game of Madden’ 20 in XBOX sessions “game before the game”

Both players were playing for charity of their choice to receive 50 Xbox One consoles and a copy of Madden NFL 20. Kelce played for his for his organization, Eighty-Seven & Running, while Sherman represented for Blanket Coverage, the Richard Sherman Family Foundation.

Despite saying he wasn’t much a Madden player, Sherman got off to a quick start.

Sherm, with a help of the Niners suffocating defense, was able to grab a big lead in the third quarter after grabbing a pick six.

Kelce somehow made it close late in the fourth quarter with a hail mary in the last 30 seconds.

Eventually Sherman was able to put Kelce away when he recovered the final onside kick for a final score of 21-16.

Even though Kelce lost his charity was still awarded 25 XBOX ones and a copy of Madden NFL 20.

If you want to watch a replay of Sherman and Kelce’s game of Madden you can watch it below.