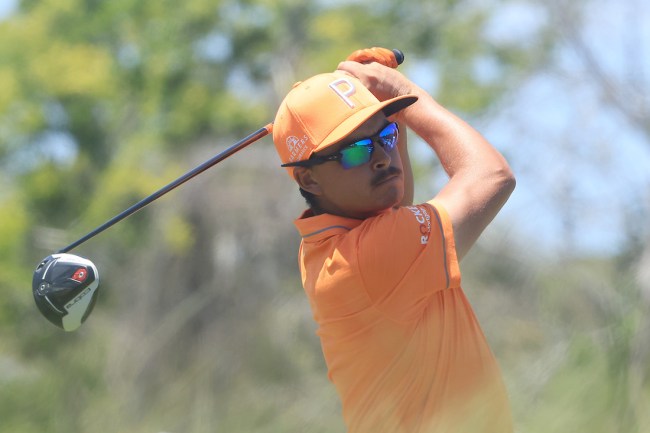 It hasn’t been a great couple of years professionally for Rickie Fowler, who, prior to this year’s PGA Championship, hadn’t had a top-10 finish at a tournament since January 2020, leading to some in the media wondering what might be going on with the 32-year-old. But the mustachioed Fowler bounced back and held his own at the grueling Ocean Course at Kiawah Island, finishing tied for 8th place.

After Fowler flashed some of his familiar talents at the PGA over the weekend, the golfer says his mindset was in a strong place after practice rounds with Michael Jordan, who, as we all know, is one of the most ruthless competitors any sport has ever seen.

During his performance at the PGA Championship, Rickie Fowler was asked about what led to the bounce back performance. He didn’t hesitate while boasting about playing with MJ.

“Playing against M.J. is as good as it gets to prep,” Fowler said Thursday after shooting a 1-under-par 71 in the first round of the PGA Championship.

“I think not having to hand out any money to M.J. has been probably the bigger wins because of how Grove sets up for him, where he’s able to press,” Fowler said of his historical record of money games. “If I’m able to win the original match and not have him flip the original match because of the press or multiple presses, if I don’t lose money to him, that’s actually a win.”

“He’s good,” Fowler said. “A lot of the guys in the shop, there’s side bets and stuff, typically his over/under number is 77.”

For those unfamiliar with what Rickie Fowler’s referring to, Jordan’s golf course — nicknamed “Slaughterhouse 23” — is basically the MJ’s personal golfing playground, with the Hall of Fame hooper setting it up to play to his strengths, while also personalizing it as much as possible so everyone knows who’s king in the clubhouse.

And while Fowler may have lost some cash to Jordan during their rounds playing at the course, considering it led to a big payday with a top-10 finish at the PGA Championship, it seems like money well spent. Nothing like getting mentally bullied by the GOAT to prepare for the ups and downs of a major championship.