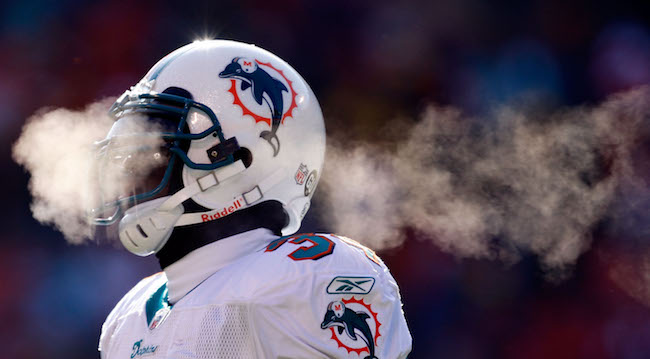 Based on everything I’ve read about him, Ricky Williams is the guy who ate a little too many mushrooms during a pilgrimage to Joshua Tree and was never really the same after he came back. The former running back— who once studied ancient medicine after being suspended from the NFL thanks to his love of marijuana— has some beliefs that are as unconventional as some of the investments he’s made regarding them.

Williams hasn’t lost any love for the plant that brought his promising career to an abrupt stop before he eventually made a comeback, and some of his endeavors include hosting a weed-centric Super Bowl party in addition to opening a 420-friendly gym and launching his own line of cannabis products. However, he’s also recently diversified his portfolio in the most 2018 way possible: buying Bitcoin.

While most people decided to jump on the cryptocurrency bandwagon because it was the cool thing to do when the market exploded last year, Williams didn’t jump headfirst into the game just because everyone else was doing it. No. He had another, much more reasonable reason: the planets were properly aligned.

Williams spoke with CNBC about how he uses astrology to guide his decisions in life, which may or may not involve spending his days online trying to figure out which 90s sitcom character he is based on his sign. While some investors spend their time exhaustively devouring crypto news and looking at trend charts filled with seemingly random lines, Williams instead looks towards the heavens, where Uranus is apparently about to enter Tauras.

I have no real idea what that means, but the article did its best to sum up his reasoning:

The revolutionary aspect of Uranus in astrology, combined with Taurus’ focus on wealth and finance, is leading Williams to predict that, in the near future, “we’re going to totally change the way we view and understand” finances.

Williams— who says he invested a sum below $50,000 in the cryptocurrency— is part of HODL Mafia and believes in the long-term viability of Bitcoin.

If you’re looking for more astrology-inspired investment advice, you’re in luck! Williams allows anyone to reserve a one-on-one session with him for $300 (it’s unclear if the appointments are “bring your own weed”). I know close to nothing about money management, but I’d suggest spending that money on Bitcoin instead.