Out Of Respect For Kobe Bryant, RJ Barrett Doesn’t Want To Be Called ‘Maple Mamba’ Anymore 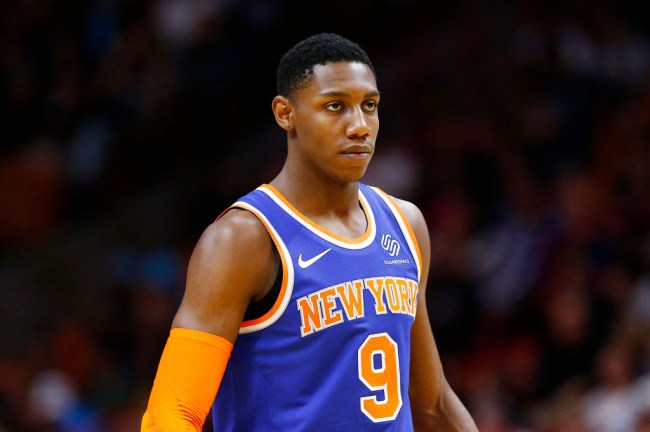 RJ Barrett is only 19-years-old and wasn’t even born until Kobe Bryant already had four NBA seasons under his belt, but the Black Mamba certainly had an impact on Barrett, just like most young hoopers.

Barrett even picked up a nickname associated with Bryant during his one season at Duke. Barrett is from Toronto, so people cleverly began calling him ‘Maple Mamba’ because of the way he carried himself on the court and his Canadian roots.

After the tragic news of Bryant passing away in a helicopter crash, out of respect to Kobe, Barrett doesn’t want to be called that anymore.

“I don’t want to get called that anymore. Somebody great like that, to lose him in that way, is really sad,” Barrett, who is sidelined with a sprained ankle, he told New York Post. “Even to this day you just think about it and it keeps replaying in my mind. It’s tough.”

According to The Post, Barrett never met Bryant, but he certainly admired the way Kobe went about his business.

“I’ve always said I loved his mentality. I always tried to play that way. He had an ‘I don’t care’ mentality,” Barrett said. “He worked so hard. He played so hard all the time. I try to emulate that a lot.”

Barrett has been sidelined with a sprained ankle and hasn’t played since January 16.

Teams around the league have been intentionally committing 8-second violations and allowing the 24-second shot clock to run down to zero to pay their respects to Bryant as well. Players have also been ‘informally retiring’ the number 8 and the number 24 league-wide and switching away from those two numbers out of respect for Bryant.