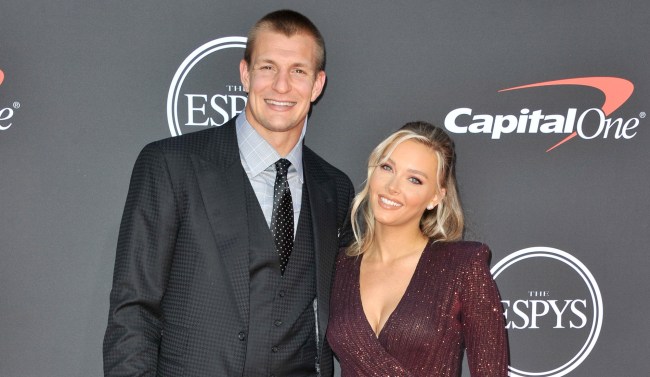 Until the New England Patriots take their first official snap on offense September 8th versus the Pittsburgh Steelers, speculation will continue with some fans believing that tight end Rob Gronkowski is not 100 percent retired. (And even then it won’t really quit.)

Back in June, a report claimed that no one, including the Patriots, believes Gronkowski will stay retired in 2019.

Heck, Gronk’s own girlfriend Camille Kostek said about him, “I think he is messing with everybody, then again he stumps me all the time so who knows? He could be pulling this out of the woodwork at some time. I would love to see him out there, but I am also respecting him taking this time for himself, healing up his body, and enjoying the time off.”

She’s right about one thing: he is definitely enjoying his time off.

As for whether he is really retired or just trying to avoid the pounding of training camp and waiting for the season to officially kick off before reversing course, Gronk himself added more fuel to the fire on the ESPYs red carpet Wednesday night when he appeared, at least to some, to tell Drew Brees, “I’m coming back.”

Gronk and Brees chopping it up on the red carpet #ESPYS pic.twitter.com/iDioPoqbNS

Yes, that is Captain Obvious photobombing the two NFL stars, and yes, Twitter sleuths immediately sprung into action trying to decipher precisely what Gronk told Brees, and what it could possibly mean.

Call me crazy but I swear to god Gronk said “Yeah I’m coming back” pic.twitter.com/kkFBrVQYAU

Gronk coming out of retirement to team up with Brees? 👀👀 https://t.co/ruoyQiTrvm

Captian obvious is obviously telling us gronks coming back pic.twitter.com/sv11dV38si