No One, Including The Patriots, Believes Rob Gronkowski Will Stay Retired In 2019: Report 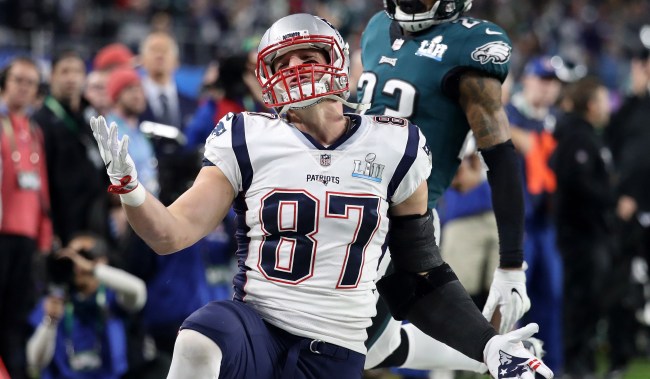 Will he or won’t he? That is the question NFL fans, especially those who root for the Patriots, are continuing to ask about recently-retired Rob Gronkowski.

Since announcing his retirement, Gronk has been pestered by the media and fans who simply do not believe that the legendary tight end is really done playing football.

This speculation and questioning has been fueled by Drew Rosenhaus suggesting that his client could end up coming back to the NFL, Tom Brady holding out hope for his return, as well as comments by Gronk’s girlfriend, Sports Illustrated swimsuit model Camille Kostek.

Last month, Kostek said about Gronkowski, “I think he is messing with everybody, then again he stumps me all the time so who knows? He could be pulling this out of the woodwork at some time. I would love to see him out there, but I am also respecting him taking this time for himself, healing up his body, and enjoying the time off.”

Meanwhile, others have speculated that Gronk will not return because of his balky back and the fact that he has so much money in the bank.

This past Sunday, Gronkowski was asked to put all the comeback rumors to rest and his response was, “Oh man… whatever I say, it doesn’t matter. It will always be crazy out there. You can put them to rest. You can do it.”

Turns out he’s right. Whatever he says, it doesn’t matter, because according to a new report by Mike Freeman of Bleacher Report, no one believes him.

The belief is that once the season gets going, and Gronkowski starts missing football, he will rejoin the team. It’s not just a hunch, sources say; you can count on it.

A few things to keep in mind. One, Gronk only recently turned just 30-years-old. Two, the Patriots’ current depth chart has a suspended Ben Watson and Matt LaCosse at the top of the tight end position after releasing Austin Seferian-Jenkins on Tuesday. And three, there’s that TB12 guy on the team who doesn’t have a whole lot of patience for failure.

Back in March, odds for a Gronk return to the NFL were set at 10 to 1. Seems like it might be a pretty solid investment right about now, don’t you think?