Rob Gronkowski’s Retirement Plans Include An Appearance On A Game Show, Possible Dog-Walking 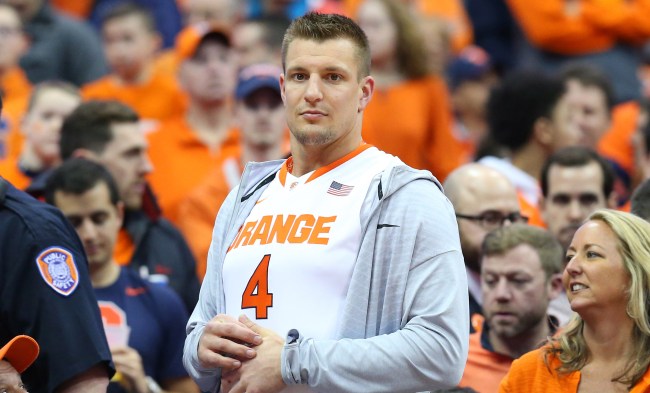 Now that “The Summer of Gronk” has officially become a full-time thing for Rob Gronkowski (“The Year of Gronk?”), thanks to his semi-expected retirement, what does the big man plan to do with all of this newfound free time?

First of all, other than spending a lot of time with his girlfriend Camille Kostek (who some completely rational Patriots fans are blaming for his quitting football), the best odds based on prop bets are wrestling for WWE and becoming an NFL commentator.

However, before any of that happens, Gronkowski has a date with his Patriots buddy Julian Edelman to appear on The $100,000 Pyramid game show in NYC at 5 P.M. on April 11th.

After that it’s anybody’s guess, but Tom Curran of NBC Sports Boston, was able to get Gronk to give him a hint (sort of) this past Sunday afternoon.

“Lemme ask just one question,” I implored. “Do you think there’s any chance that, around Thanksgiving, you might be back playing?”

His eyebrows went up. His eyes widened. His mouth made a little O. He shook his head.

“I’m into new opportunities,” he said, pointing at Jim. “I was at CVS today with Jim. Bagged all his stuff. I might do that, be a bagger. I might open a dog-walking business, be a dog-walker, I don’t know.”

He kept rocking from one foot to another as he spoke, hands coming together then separating, fingers splayed wide. He’d sometimes punctuate a sentence by reaching out to rap the other big dude, knuckles slapping the front of the other big dude’s shoulder.

I told Gronk a friend of mine just opened a dog-walking business. He could contract out as a pooper scooper.

“No doubt! Get a long stick with a scooper on the end and a handle,” Gronk said, acting out the whole scene. “I just hit the trigger and it scoops it up. Then I reach back and drop it in a big bag on my back. Put all the poop in there and empty it every once in a while! So many ideas!”

Yeeeeahh… he’s totally going to play for the Patriots at some point next season. Tom Brady knows…