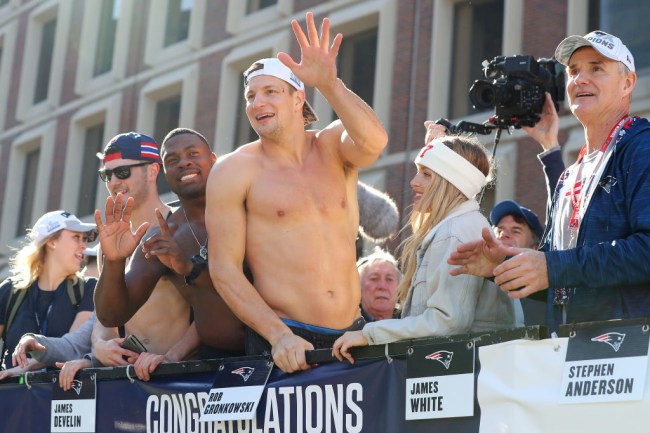 Over the course of his nine-year career in the NFL, Rob Gronkowski established himself as one of the best—if not the best—tight ends of all time.

Unfortunately, all good things must come to an end, and after months of speculation, Gronk announced he was retiring from football over the weekend.

During his time in New England, Gronk helped the team win three Super Bowls, was named to the Pro Bowl five times, and racked up a total of 79 touchdowns (which is probably 10 more than he would have preferred).

Gronk didn’t spend any of the $60 million he got for playing with the Patriots, opting instead to live off that sweet, sweet endorsement money and ensuring he wouldn’t go the way of Antoine Walker after hanging up his cleats.

He could theoretically coast off of his earnings for the rest of his life but it’s unlikely we’ve seen the last of Gronk, and if you’re a fan of prop bets, I have quite the treat for you.

According to Forbes, SportsBetting.ag is now letting people wager on what Gronk will do now that he’s retired.

It didn’t take long after Gronk’s announcement for Drew Rosenhaus to suggest he could be returning to the NFL sooner rather than later so that certainly doesn’t seem like the worst pick in the world (although he’d have to return before the end of 2019 as stipulated by the sportsbook).

Drew Rosenhaus on @GetUpESPN on Rob Gronkowski’s future: “If the team was struggling or they needed him at some point next year, and let’s just say hypothetically Tom Brady gave him a call and said ‘Rob, I need you.’ I wouldn’t be shocked if he came back to play a few games.”

With that said, WWE’s Mojo Rawley says he thinks it’s only a matter of time until Gronk steps into the ring, so even if it doesn’t give you a huge return on your investment, it might be the safest bet on there when you consider he’s wrestled before.

However, as he revealed in an interview with Conan O’Brien, Gronk once inadvertently worked as a male stripper back in college for a night.

I’m down to throw a few dollars on the off chance he decides to get his Magic Mike on again.