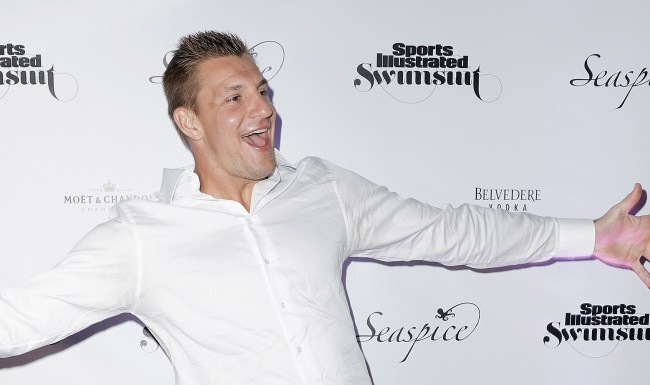 The Rob Gronkowski retirement tour made a stop on Sunday at Gillette Stadium, getting his head shaved in support of the annual “Buzz Off For Kids With Cancer” charity event.

It was the ninth year in a row Gronkowski has participated in the 10-year-old One Mission event, and it sounds like it’s the kind of thing he will be doing a whole lot more of now that he will no longer be running routes on the gridiron.

His girlfriend Camille Kostek said just a month ago, “I think he is messing with everybody, then again he stumps me all the time so who knows? He could be pulling this out of the woodwork at some time. I would love to see him out there, but I am also respecting him taking this time for himself, healing up his body, and enjoying the time off.”

On Sunday, however, Gronk seemed to make it pretty definitive that he has no intention of returning to the NFL.

When asked if he would like to finally put all the comeback talk to rest by Karen Guregian of the Boston Herald, Gronk responded, “Oh man… whatever I say, it doesn’t matter. It will always be crazy out there. You can put them to rest. You can do it.”

When pressed to put the rumors to rest himself, Gronk replied, “I just did… yes. I’m feeling good, I’m in a good place. It’s great to be back (at Gillette), though.”

As for other plans he has for his retirement – something you can actually bet on – in addition to appearing on a game show and possibly becoming a dog walker, someone suggested he try out becoming a barber for his new career after seeing him shave people’s heads at the event.

“I’ve been filling out a lot of job applications, so that’s a new one right there,” he said. “I’m going to have one cut, it’ll just be the buzz, the Gronk buzz I’ll probably call it.”

That or he could play tight end for the Patriots in the fall. Because, as we all know, once the NFL season starts, rumors of his return will again be firing on all cylinders.