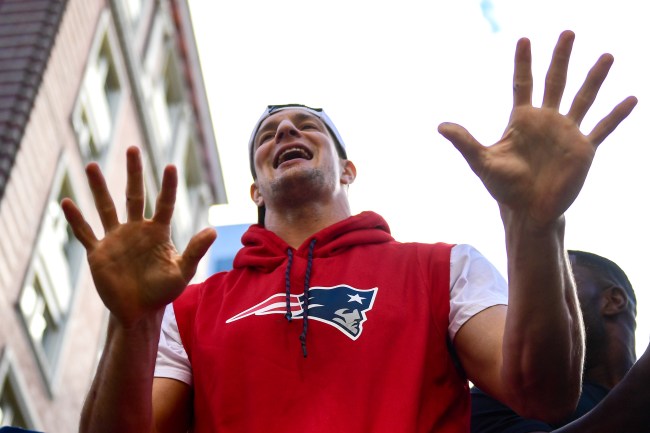 Rob Gronkowski is, arguably, the greatest tight end in NFL history. Sure, he may not have all the gaudy career stats that others before him have, but Gronk changed the position in ways that some other guys never did, and, let’s face it, it’s been fun AF to watch.

Thing is, because of his balls-to-the-wall style of play — and some unfortunate luck — the New England Patriots tight end hasn’t been able to stay on the field as much as we’d all like him to. Gronkowski has battled injuries, some major, for the past few seasons, which led him to at least consider retirement after the past couple of years. While he did decide to come back for the 2018 season, and stayed relatively healthy, he’s toying with the idea of calling it quits for good once again, with a decision expected to come soon.

However, given the length Rob Gronkowski has taken on actually making his retirement decision this offseason, along with some other factors that have gone in his favor to end the Pats’ Super Bowl season, one report suggests that the bullish tight end is likely returning for at least one more season. That’s according to Mike Florio of Pro Football Talk, who said shared his reports on WEEI’s “Mut & Callahan”.

Florio said he heard before the Super Bowl that if Gronkowski made it through the game healthy and quarterback Tom Brady remained with the team for the upcoming season, there was a “good chance” Gronk would play in 2019.

“I was told on Super Bowl Sunday that if he emerges from the Super Bowl healthy and he knows Brady is all in for another year, there’s a good chance he comes back, which is a surprise,” Florio said. “It is a major shift from how he was thinking a year ago. But he got through the year largely unscathed. He’s healthy. He’s feeling good. Maybe he’s thinking, and maybe Tom Brady has been working on him, maybe that Alex Guerrero book has got him something in his avocado ice cream that is making him love football a little bit more.

“It would be a surprise if he changes his mind and plays, but the longer this goes on — when he said after the Super Bowl he would make his decision in a week or two, that told me he would announce the decision he already made in a week or two and he’s retiring. Here we are a month later, and he hasn’t announced a decision yet. Maybe he is thinking about it a little bit longer than he did last year.”

Forget if you’re a Patriots fan or not, if you’re a football fan, the news that Rob Gronkowski might be thinking about coming back is awesome. Of course, there are some other factors related to that — like how much help he has from other tight ends, according to reports — but that stuff will all work itself out as NFL free agency starts next week.

With Tom Brady recently commenting on one of Gronk’s Instagram pics hinting at the potential of playing again together next year, here’s to hoping the tight end comes back and gives it another go. The NFL would be less fun than it already is without Rob Gronkowski in it.