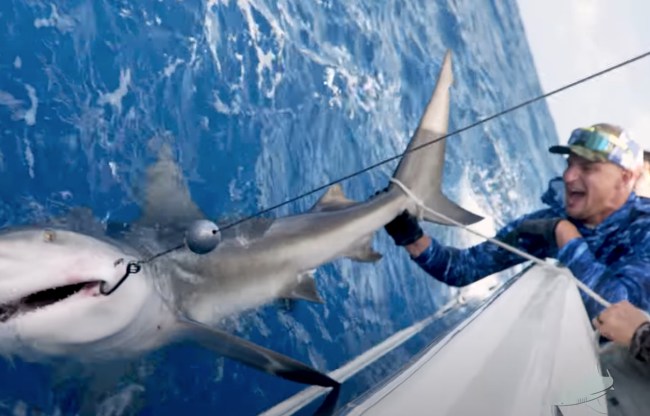 Rob Gronkowski went fishing with his brothers out of Sarasota, Florida and I’m at least 5% offended that he was in my hometown and I wasn’t invited. Despite being home to the MTV show Siesta Key this is still a relatively small town and I grew up fishing these waters nonstop and I’m just saying that I could’ve probably added some value on that boat. Maybe next time my invitation will be in the mail…

Anyway, Gronk and his bros went out fishing in Sarasota with Josh Jorgensen from BlacktipH. Josh specializes in catching Goliath Grouper over on the East Coast of Florida but he was still able to put the Gronkowski Brothers on a gargantuan Goliath Grouper out of Sarasota. Gronk finished the day by reeling in a huge Bull Shark and they also caught some sizable Barracuda to start the day.

I tend to think of this time of year as the peak of snook fishing season in Sarasota because they get stacked up off the beaches and passes in the mornings and at sunset and it’s easy catching them but it’s fun to see what’s happening offshore around here right now. It’s also nice to see that Gronk was able to get away from Bucs training camp for a day because I’ve heard the Florida heat is ‘kicking his ass’.

Enjoy this footage Gronk catches the biggest fish and sharks of his life while competing against his bros.

Can we take a moment to discuss how Bull Sharks are the f***ing worst? They hang around and steal your fish by biting them in half and ruining your day. They’re stealthy predators that can live in brackish and freshwater for extended periods of time. A Bull Shark was once caught all the way up in St. Louis on the Mississippi River.

They certainly don’t live their lives in search of humans but they have a reputation for being the most aggressive of sharks and that rep didn’t just materialize out of thin air. They’re the worst.

For more fishing videos from BlacktipH, you can follow that link and check out our recent articles.