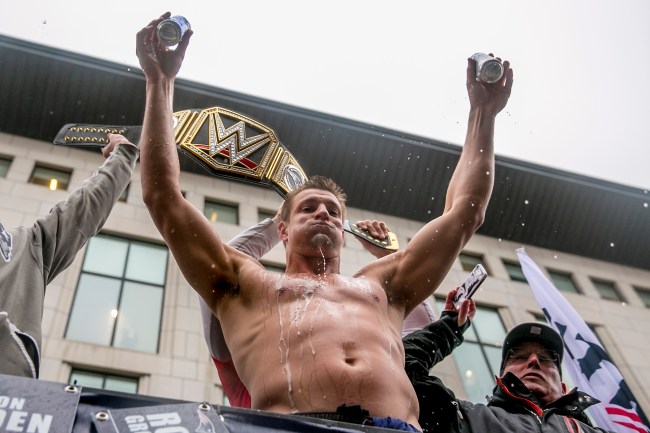 Rob Gronkowski may have retired from the New England Patriots and the NFL a couple of weeks ago, but the bullish tight end is forever in everyone’s hearts, so he’s still being talked about a lot. That doesn’t mean that it’s in a good light, though, because, though insane to think, there are actually people out there who didn’t enjoy the whole “Gronk being Gronk” schtick that the tight end often portrayed.

One of those people? Andrew Brandt, who’s a current contributor to SI.com and a former front-office executive for the Green Bay Packers. Basically, Brandt is an old school, throwback who thinks Rob Gronkowski’s partying ways may have been too much, and, for some reason, even contributed to some of Gronk’s injuries during his playing days.

No, seriously, take a look at what Brandt wrote on SI.com yesterday about Rob Gronkowski, with the overlying tone essentially being that the tight end got a free pass for being a big, partying fun-haver.

This thought is not to wade into predictable debates on whether Gronk will “unretire” at some point (he won’t) nor whether he is a Hall of Famer (he probably is). Rather, I look back shaking my head at the free pass that Gronk constantly received from fans and media, even beyond New England. “Gronk being Gronk” became an easy catchphrase and rationalization about behavior that (1) was certainly not admirable and (2) would not create the same response for other players.

Listen, I get it; Gronk is a goofy and likeable meathead. And likeable players can get away with things that players with a more serious tone cannot. That, however, shouldn’t give them free passes. I ask you to pick another player, any player; I will not pick one for you, as that would skew this experiment. Now imagine that player shown slamming beers, partying regularly with bikini-clad women and generally promoting a hard-party lifestyle. Would we say it’s just “him being him” and let him have his fun? I doubt it.

I know this is not a popular stance and some of you are offended I would raise these questions about the lovable Gronk. And Gronk, with his partying, has not broken any laws and is just having a good time. But consider this: It is a fair question to ask whether Gronk would have been injured less and had a more productive career had he partied less.

Gronk deserves his due on the field, which he is getting. But fans and media usually don’t laugh off his kind of off-field persona the way they have with Gronk. Gronk’s behavior led to rationalization, whereas the same behavior coming from others would typically lead to excoriation.

What in the hell is Andrew Brandt talking about here? The first part is understandable, because he brings up a good point saying that Rob Gronkowski’s partying ways probably did give him a “free pass” for his off-the-field wildness. If we’re being honest, guys like Johnny Manziel have done the same thing, but they don’t get immortalized for being fun, but instead get torn down for not being committed to the game.

That second part about Rob Gronkowski from Brandt, though? It makes no sense. Was there anytime when Gronk missed a game because he was nursing an injury from something he was doing outside of football? No. Was he ever so hungover that he missed a game? Not that any of us know of. Did Gronk do anything to show anyone that he wasn’t committed to football during the season? Sure didn’t. So Brandt’s message here seems to fall on deaf ears — or should — because there’s no truth to the tight end ever being injured from partying.

Look, I get the fact that Rob Gronkowski’s style isn’t for everyone — hell, even the Pats had their questions about his character before drafting him. But for Andrew Brandt to deliberately write something that has no truth to it is so far out of bounds it’s almost a joke to even give it attention. The entire thing just seems to come across more of an opinion of Gronk’s behavior from the old school Brandt than anything bearing any fact.