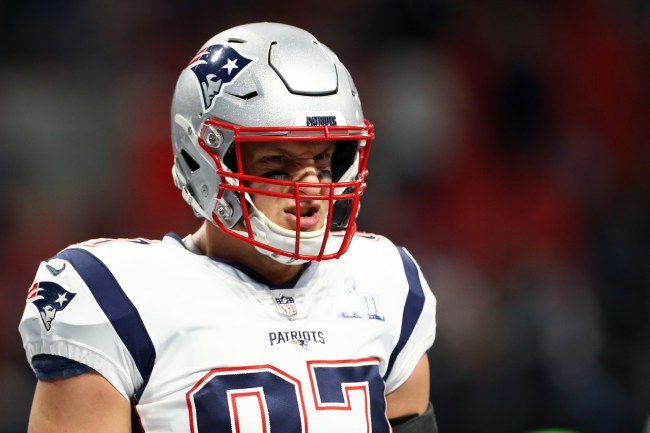 The New England Patriots endured a major blow a couple of days ago when superstar tight end and all-around party animal Rob Gronkowski announced on Instagram that he was retiring from football. While the news wasn’t completely shocking since Gronk had toyed with the idea of walking away from the NFL the past couple of offseasons, it was still a major disappointment for all football fans to see the 29-year-old ending his Hall of Fame career.

While are we’re left with now are the memories of Gronk — and there were plenty of them — the New England Patriots decided to compile all the great ones into one tribute video for the guy, tweeting out the thing today. Get some tissues while watching this thing, because it may bring some falling.

There were a lot of special moments over the last nine years, and we enjoyed every single one of them. Thank you, Gronk. pic.twitter.com/GHzbhAOt2t

Yeah, OK, who’s peeling onions in here? I know I’m not the only one getting choked up after watching that, right? And I’m not even a New England Patriots fan. After seeing some of the Twitter reactions to the Gronk tribute video, it seems there are plenty of other people getting a little teary-eyed, because look at some of the reactions.

Wow yeah I’m not crying or anything

While there’s some speculation, hope, and a (possible) small chance that Rob Gronkowski returns at some point in the 2019 NFL season after he clears his mind and rests his body instead of taking part of OTAs, training camp and all that, I’m not one to hold my breath. Sure, it could happen, but will it? Doubtful. For now, I’ll just re-watch that New England Patriots tribute video to Gronk and remember the good, bad and always entertaining, because the dude is all-time, so here’s to whatever comes next for him.