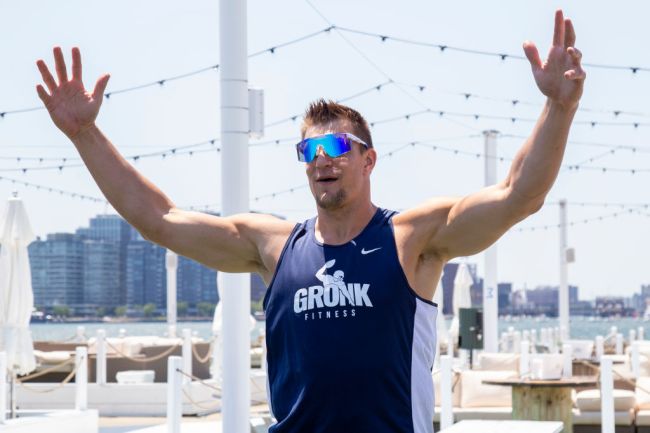 Just a couple of months into his retirement from football, Rob Gronkowski has already moved on to some big opportunities outside of the sport. Tonight, he’ll be a part of the “Gronkcast” for UFC 278.

It seems that Gronk deciding to take a shot at doing some MMA announcing has some people wondering about Gronk’s MMA skills. Today, he was asked about what he thought would happen if he were to meet a few NFL players inside the Octagon.

.@RobGronkowski decided which NFL players he could beat in a UFC Octagon 😂👊

Gronk was asked how he would fare against Tom Brady, Julian Edelman, Mike Evans, Aaron Donald, and Vince Wilfork. While Gronk didn’t seem to feel too great about his chances against Wilfork and Donald, he seemed pretty confident in his ability to win a fight against Brady, Edelman, Metcalf and Evans.

At 6’6″ and weighing in around the heavyweight limit, there are likely plenty of NFL players that Gronk would be a real problem for in the cage. With that kind of size, it’s not all that surprising that Gronk believes he could beat most of that list.

Brady is right around the age where he can expect to start getting calls from Bellator about signing a contract and is outweighed by Gronk by about 40 pounds even at 6’4″. Julian Edelman was one of the smaller players on the Patriots roster when he was playing alongside Gronk. Even Evans would be giving up more than 30 pounds in this hypothetical matchup.

Metcalf would also be giving up about 30 pounds, but his strength would make him an interesting opponent for Gronk.

Unfortunately, for now fans will have to just settle for hearing Gronk analyze MMA rather than competing in the sport.