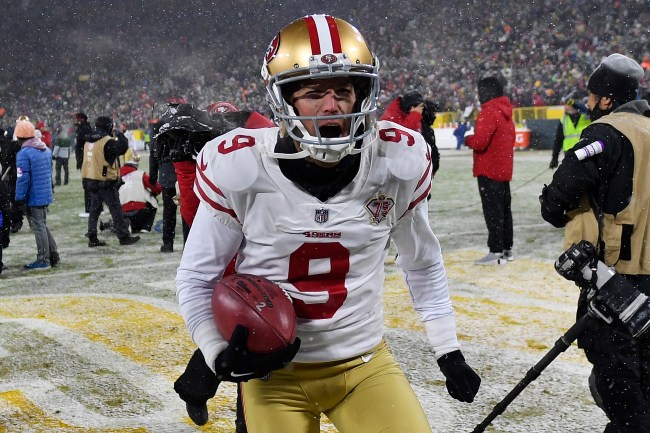 Saturday’s NFC Divisional Round game between San Francisco and Green Bay came down to the final seconds. 49ers kicker knocked in a game-winning field goal as time expired and eliminated the Packers from the playoffs on their own turf.

None, however, have been as important as the final kick on Saturday. The 49ers got the ball back with just over three minutes left and drove 44 yards on nine plays to set up a 45-yarder for Gould.

In the cold, Gould was as cold as ice and drilled it.

THE @49ERS WIN IN LAMBEAU TO ADVANCE TO THE NFC CHAMPIONSHIP. #FTTB #NFLPlayoffs pic.twitter.com/7JouarMybq

The celebration was on.

Although the game-winner was the biggest kick of the night, obviously, but it might not have been the most savage. Prior to the game, Gould was getting warmed up on the field during the Packers’ player introductions.

Literally right in the middle of them.

As the players got introduced one by one and ran out of the tunnel through a gauntlet of teammates, Gould was right next to them. Less than 10 yards away, the veteran kicker was kicking over the Green Bay players.

Robbie Gould does not care about your player introductions pic.twitter.com/xL2wKFBACF

Why Gould could not have used the other side of the field is unclear. Maybe he had already kicked in that direction and needed to get work in on the other end?