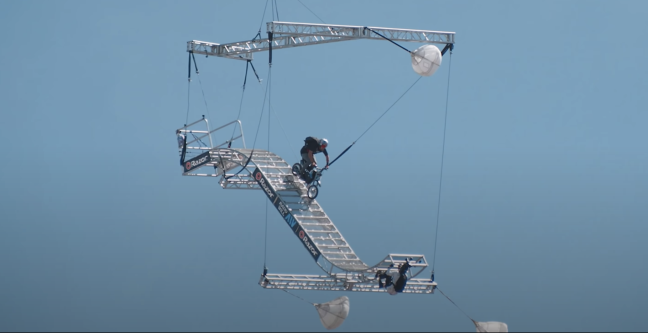 You might have heard the name Robbie Maddison before. The 40-year-old stunt man, daredevil and action sports athlete has claimed numerous world records, won multiple medals at the X-Games and is known for going big.

In recent years, Maddison has pulled back from bike stunts after “being dead five times.” He has focused more on water-based stunts, as well as pilot training and skydiving— three things that better prevent head injuries in comparison to motorcycle stunts.

His newest jaw-dropping feat combined some of his past with his present. He took his dirt bike to the air.

Inspiration for the stunt came from his two sons, who were not impressed by just one backflip. They told him to try two, and then three, and then four.

They wanted to see a quadruple backflip.

After being pushed to his limits, Maddison looked to the sky and set out to give his sons what they wanted. With a helicopter holding a steel ramp that he designed built 5,000 feet in the air, Maddison locks in.

He drops into the ramp and goes flying off of the ramp into a freefall. While plummeting to earth, Maddison completes the quadruple backflip before he ditches the bike and pulls his parachute.

The stunt was filmed in just one take, destroying only one Razor bike.

To prepare, he got reps jumping from planes and doing backflips without the bike. He also hung the ramp above his foam pit to practice his drop-in.

The whole thing is crazy.