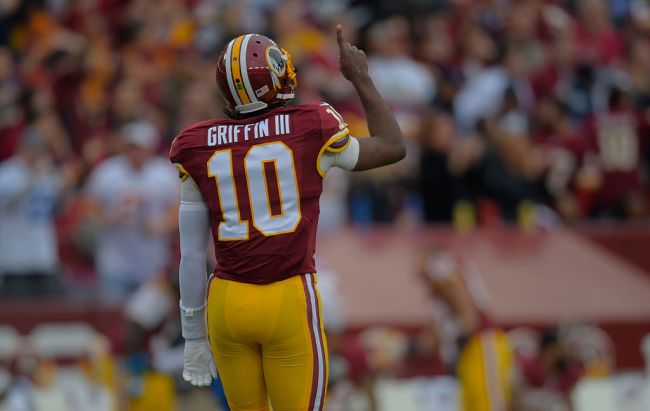 The Washington Football Team placed quarterback Ryan Fitzpatrick on the injured reserve list on Monday afternoon. It isn’t quite clear how long he will be on the IR, but it leaves Washington with a potential opening at quarterback for around 6-8 weeks.

Taylor Heinicke, who the Football Team brought back during the offseason, will start in his place on Thursday. Behind him, Kyle Allen will serve as the No. 2 and Kyle Shurmer was signed to the practice squad.

Change at the position is nothing new for Washington, which has used 10 different quarterbacks in three seasons. However, one of the team’s former signal-callers is vying for his chance to get back on the Hogs’ roster.

Robert Griffin III, who played with the Team from 2012-2015, posted on twitter with the caption “Make the Call,” asking his former organization calling him back. He also posted a video of a 76-yard touchdown run from his rookie season.

Washington infamously pushed its 2012 Rookie of the Year back into the lineup for a playoff game despite a lack of clearance from Dr. James Andrews for an injury he had suffered earlier in the year. As a result, the 2011 Heisman Trophy winner re-injured his knee and was never quite able to return to form.

RGIII three has since bounced around between the Browns and Ravens before joining ESPN as an analyst after a lack of interest this offseason.

During his first season in the league and with Washington, Griffin III completed 65.6% of his passes for 3,200 yards and 20 touchdowns with only five interceptions. He added seven scores on the ground and averaged 6.8 yards per attempt on 120 attempts.

For Washington to sign him makes a lot of sense. What could it hurt?