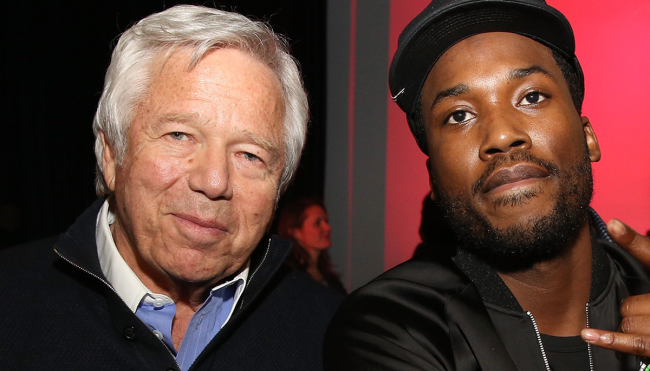 Shopping for a birthday present is hard enough as it is even when the person you’re trying to pick out a gift for isn’t the billionaire owner of an NFL franchise who can buy whatever the hell he wants (except, apparently, for a masseuse to help him relieve some tension in the privacy of his own home).

As a result, I don’t envy anyone who felt like they needed to get Robert Kraft something to commemorate his 80th birthday—a group that included some high-profile names including Meek Mill, Jay-Z, and Philadelphia 76ers co-owner Michael Rubin.

Earlier this year, Kraft used some of his very nice $6.9 million fortune to purchase a $43 million estate in The Hamptons, and over the weekend, Rubin stopped by the compound to give the man who became an octogenarian on Saturday a nice little surprise in the form of a new Bentley.

The Patriots owner was so shocked that he even uttered the f-word (“fudge”) while asking how they managed to track down a whip he apparently hasn’t been able to get his hands on despite (again) being worth $6.9 billion.

While Rubin was the person who presented the birthday boy with the car after it was transported from Florida, he mentioned he had a little help from Kraft’s longtime friend Meek Mill as well as Jay-Z (it’s unclear who the other people he referred to in the video were, but it seems like the “Allen” in question may have been Allen Iverson when you consider he’s also hung out with the legendary 76er).

I’m glad we finally have a video of Robert Kraft that finishes with a happy ending.