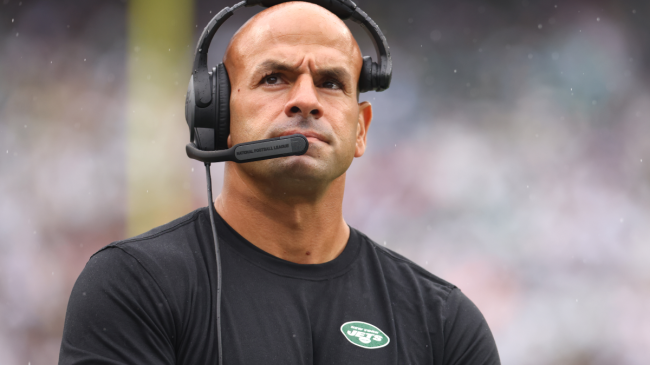 Jets head coach Robert Saleh has quite the turnaround to deal with in New York. The franchise has only had one winning season over the last decade as opposed to six last place finishes in the AFC East.

Saleh began Year 2 with an opening day loss to Baltimore, which isn’t always ideal when the crosstown Giants land a victory. Many doubt whether Saleh is the man to get things going in the Big Apple, and he’s apparently heard the outside noise.

In fact, it seems he’s inviting it.

Saleh was heard saying he’s “taking receipts” from those who “continually mock” the Jets.

“You’re just going to feel it, and in a way it does just click, stacking up day after day after day, and it’s really, really cool when it does happen because it just absolutely pops off the tape. And I know it’s gonna happen, and we’re all taking receipts on all the people who continually mock and say that we ain’t gonna do anything.

“I’m taking receipts, and I’m gonna be more than happy to share them with all of y’all when it’s all said and done.”

While the confidence is certainly good to see from the second-year head coach, most believe he’s going to have too many to keep track of.

Fans were quick to react to seeing Saleh’s comments, and it didn’t cut down on any of the Jets’ mockery. In fact, it had the opposite effect.

Good luck with that. pic.twitter.com/7FLM2S1auN

One fan said, “He’s gonna collect a lot of receipts.”

A number of other NFL viewers continued to doubt the head coach’s ability to turn the New York Jets into a winning team.

This fan joked that Saleh’s receipt will be longer than what you get at your average CVS checkout line.

Hey CVS, might be a new leader in the clubhouse when it comes to long receipts! pic.twitter.com/aput2GQR3W

Time will tell whether or not Saleh can turn it around with the Jets. For now, his doubters far outweigh his supporters.