‘The Rock’ Gives Zero F*cks, Calls CM Punk While Standing In The Ring After ‘RAW’ Went Off The Air 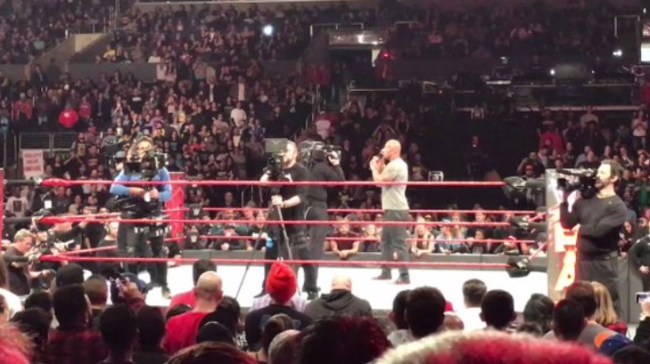 If there are two professional wrestlers who really DGAF and will do whatever they want it’s Dwayne “The Rock” Johnson and CM Punk.

So it was pretty perfect that these were two people that garnered everyone’s attention after RAW went off the air Monday night.

“The Rock” did not actually appear on the show, but was on hand to shoot some scenes for that biopic he is shooting about WWE Superstar Paige and her family.

Everyone in attendance knew he was going to be shooting these scenes after the show because he spoke to them beforehand, also off the air, and was shortly thereafter “fired” by Vince McMahon before exiting, according to Uproxx.

Following the show, Johnson returned as promised and informed the audience they would be shooting the scene where Paige wins the championship from AJ Lee, aka CM Punk’s wife.

Naturally, this being wrestling and the fans knowing that CM Punk is WWE’s public enemy number one, a chant broke out with people repeatedly calling Punk’s name.

“The Rock” then seized the moment, as he always does, and joked to the crowd that he should give Punk a call. And then he up and went ahead and did it. Unfortunately, he only got Punk’s voicemail, but the moment was still amazing.

Since Monday was National Love Your Pet Day (in addition to some other holiday), Punk’s excuse for not answering was pretty understandable.

I'm walking Larry. It's his birthday.

As for the scene they were shooting, Paige was being played in the ring (as the stunt double) by wrestling legend Tully Blanchard’s daughter Tessa.

While AJ Lee was being played by Thea Trinidad in an outfit that in no way looked like AJ Lee.

Guessing that there were some legal reasons for that outfit knowing the history between Punk, Lee and the WWE.

At least WWE still owns her music though…

So bizarre hearing this song play again at a WWE event as the actress playing AJ Lee comes out to the ring to film #FightingWithMyFamily! pic.twitter.com/QU9CNfRo9d

Can’t wait to see in the movie how they somehow try to convince people that’s how AJ Lee actually dressed.