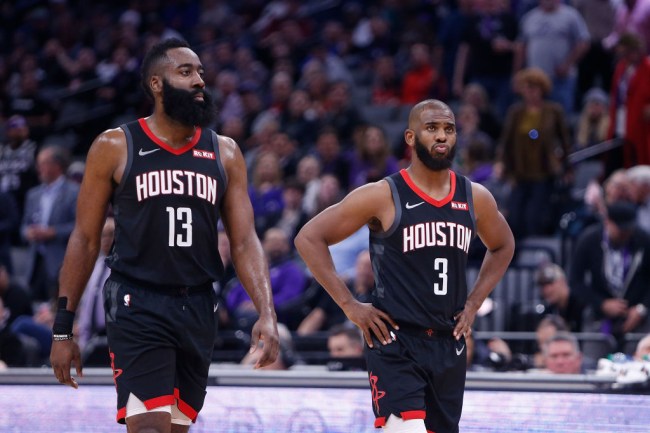 By most accounts, the Houston Rockets had a pretty successful season and made it to the Western Conference Semifinals before getting knocked out by the Warriors in a series nobody really expected them to win.

The Rockets got as far as they did thanks in no small part to the efforts of James Harden, who shouldered much of the workload after Chris Paul suffered a hamstring injury back in December and was forced to sit out for 17 games, during which the Rockets had a winning record after previously going 0-5 when he was sidelined earlier in the season.

However, it appears that all is not well in Houston based on reports that Harden and Paul didn’t exactly see eye-to-eye and got into it after they were eliminated from the playoffs. The point guard was apparently displeased by Mike D’Antoni’s reliance on Harden throughout the season and wasn’t shy about making his opinion known.

Now, it looks like Paul might not have to deal with the issue next year based on a report from ESPN‘s Adrian Wojnarowski, who says GM Daryl Morey is currently looking into a total rebuild that could end up with Paul donning a different uniform.

Sources: In calls to front offices, Houston GM Daryl Morey is showing an aggressive desire to improve roster with all players and picks available in talks. Hard to imagine James Harden scenario, but the rest under contract – perhaps even Chris Paul – could be moved in right deal.

Morey has already done some spring cleaning by firing a number of members of the coaching staff, and while D’Antoni’s job seems to be safe (at least for now) it’s becoming increasingly clear that the GM willing to go to pretty great lengths to set the team up for success next season.