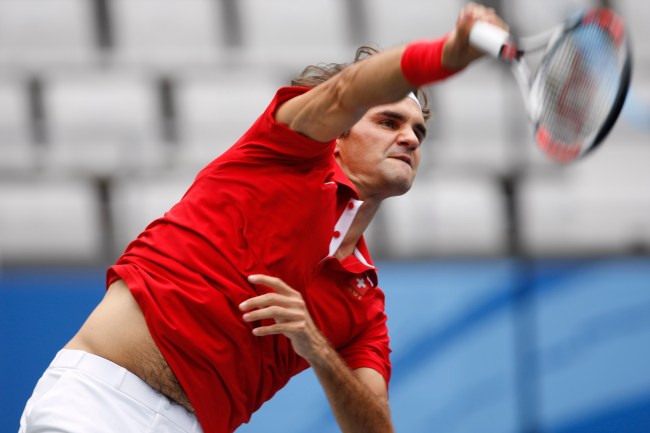 Roger Federer took to social media wearing a sweatsuit in the snow to show everyone that he’s staying active at home. He filmed himself doing some trick shots off the wall, a spin on a drill that normal tennis players struggle with. Seriously, just hitting the tennis ball back and forth off the wall is a challenge for most people.

Meanwhile, Roger Federer is putting his unbelievable hand-eye coordination on display here by bouncing the ball every which way. Does he look bored? Sure. Everyone is. But he’s doing all this with a smile on his face.

Federer fired off this tweet with the caption ‘Making sure I still remember how to hit trick shots #TennisAtHome’ and tennis fans were delighted to see a familiar face. Sports fans worldwide really really really miss sports. I think a lot of people, not even tennis fans, would pay for a pay-per-view right now of Federer playing another pro on his home court. Shit, some people would pay money to watch Federer play people in Nintendo Wii Tennis.

Making sure I still remember how to hit trick shots #TennisAtHome pic.twitter.com/DKDKQTaluY

He started to get some traction in the ‘Tennis At Home’ trend on Twitter after that tweet:

Now this is innovative! 😯

Roger Federer is 38-years-old. I only mention this because disruption to his career this late in the game could deprive Pro Tennis fans across the planet of the chance to see the G.O.A.T. take the court a few more times before he eventually decides it’s time to retire.