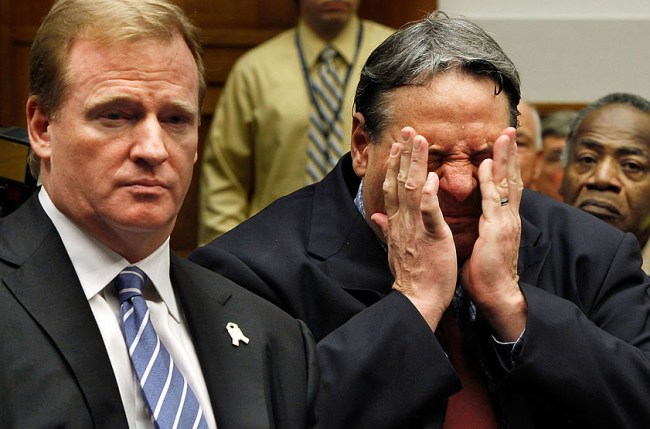 One of my favorite annual traditions is hearing the heads of various sports leagues getting mercilessly booed when handing out a championship trophy at the end of the season. In a time when we are so divided as a nation, it’s nice to know that there are some thing that we can all agree on: commissioners suck at their jobs.

You can argue all day about who does the worst job managing their respective league, but when it comes to gross incompetence, it’s really hard to top Roger Goodell. The NFL commissioner has managed to mishandle virtually every single issue that has come his way, whether we’re talking about concussion research,  the use of marijuana, and or his seemingly arbitrary stance on the instances of domestic abuse that have plagued the league over the past few years.

In an interview with Fox Sports 1, Goodell was asked to address the NFL’s most recent “controversy” of black players standing up— or, rather, kneeling down— for a cause they believe in. He was specifically asked to address the Colin Kaepernick situation, and inadvertently gave us a quote for the ages while delegating as much blame as possible to the owners who’ve declined to sign the QB:

““I’m not a football expert. I’m a huge fan. I have a role as commissioner also, but for me I watch the games and enjoy and I let the football people make those decisions. And the reality is there’s 32 different decisions, and multiple decisions within an organization, so there’s always a dispute. The idea of who can play, who can’t play, who’s best for our system and not best for our system, are decisions that should be made by those 32 teams.”

I get what Goodell is trying to say, but he picked the worst way possible to say it. As it stands, we’re now officially living in a world where the man responsible for running the National Football League does not consider himself a “football expert.” What a beautiful time to be alive.