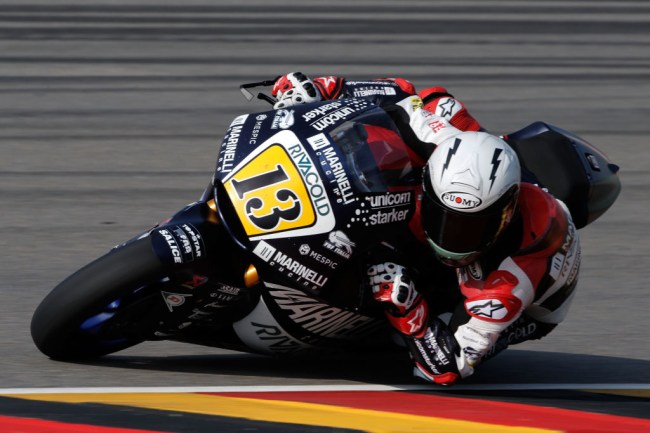 Moto2 rider Romano Fenati has been dropped by his Marinelli Snipers team and faces a lifetime racing ban after squeezing the brake of opponent Stefano Manzi during Sunday’s San Marino Grand Prix. Manzi was reportedly riding at speeds exceeding 130 mph.

According to MSN, Fenati was shown the black flag by MotoGP officials, resulting in race disqualification. He’s also been banned for the next two races.

A harder squeeze could have very possibly killed Manzi, causing Marinelli Snipers to immediately cut ties with its Italian racer. The team said in a statement:

We can communicate that the Marinelli Snipers Team shall terminate the contract with the rider Romano Fenati, from now on, for his unsporting, dangerous and damaging conduct for the image of all,” read a team statement. “With extreme regret, we have to note that his irresponsible act endangered the life of another rider and can’t be apologised for in any way. The rider, from this moment, will not participate in any more races with the Marinelli Snipers team.

To give credit where it’s due, Fenati took full responsibility and apologized for his actions on Monday.

“This morning, with a clear mind, I wish it had been just a bad dream,” he said. “I think back to those moments, I made a disgraceful gesture, I was not a man. The criticisms are correct and I understand the resentment towards me. I want to apologise to everyone who believed in me and all those who felt hurt by my actions.

“Unfortunately I have an impulsive character, but my intention was certainly not to hurt a driver like me … I do not want to justify myself, I know that my gesture is not justifiable, I just want to apologise to everyone.”

As Total Pro Sports points out, this isn’t the only time Fenati has come under fire for his shady antics. Back in 2015, he was penalized for kicking at Finnish rider Niklas Ajo.

You can now add 'grabbing brakes' to the list 😳pic.twitter.com/9mUsPaOxqV

One day you have a cushy sponsor and the next you’re a pariah. Life comes at you fast.