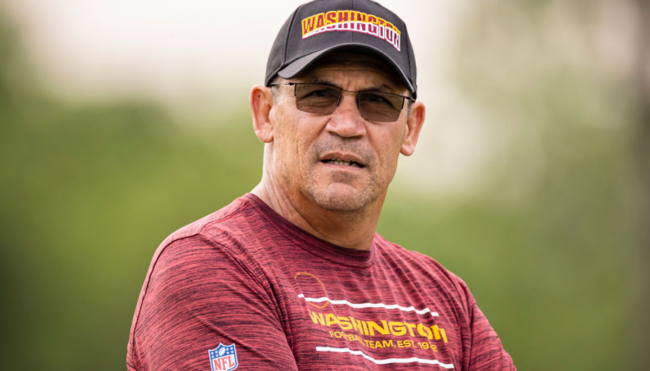 It’s been less than a year since Ron Rivera kicked cancer’s ass to the curb with the help of an incredible support system and a diet largely consisting of Taco Bell and Mountain Dew.

The head coach of the Washington Football Team is still grappling with lingering issues as he continues down the road to recovery, but based on a conversation he had with Albert Breer for the most recent installment of the Monday Morning Quarterback column, an inability to speak his mind is not one of them.

Rivera said the ordeal inspired him to “become a little more of an advocate” when it comes to certain topics that now hit particularly close to home, including the deficiencies of the American healthcare system and one of the more inexplicably controversial issues currently at the center of that realm: COVID-19 vaccines.

Thanks to the toll Rivera’s battle with cancer took on his immune system, the coach is understandably worried about being exposed to the virus. However, he’s arguably just as concerned with the many people out there who’ve waged a war against inoculation. It’s safe to say he was not shy when it came to sharing his thoughts on that second subject, as he had this to say while targeting the self-admitted laymen who have a habit of positioning themselves as medical authorities:

“You got some, quite frankly, f—king a—holes that are putting a bunch of misinformation out there, leading people to die. That’s frustrating to me, that these people are allowed to have a platform.

And then, one specific news agency, every time they have someone on, I’m not a doctor, but the vaccines don’t work. Or, I’m not an epidemiologist, but vaccines are going to give you a third nipple and make you sterile. Come on. That, to me? That should not be allowed.”

Tell us how you really feel, Ron.